About Palms, Snakes, and Tongues 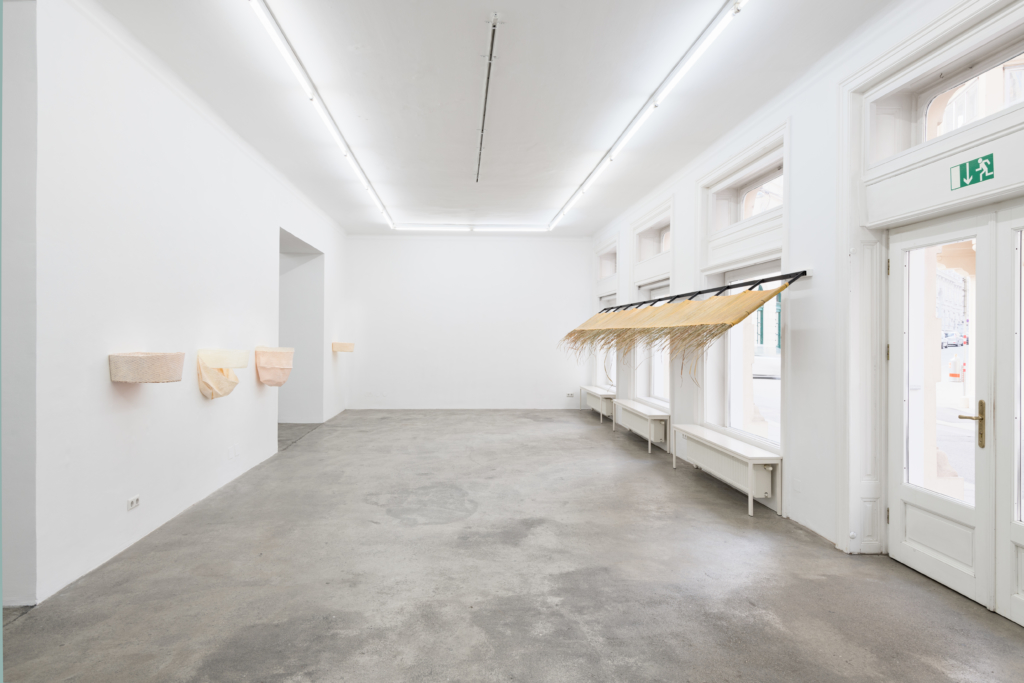 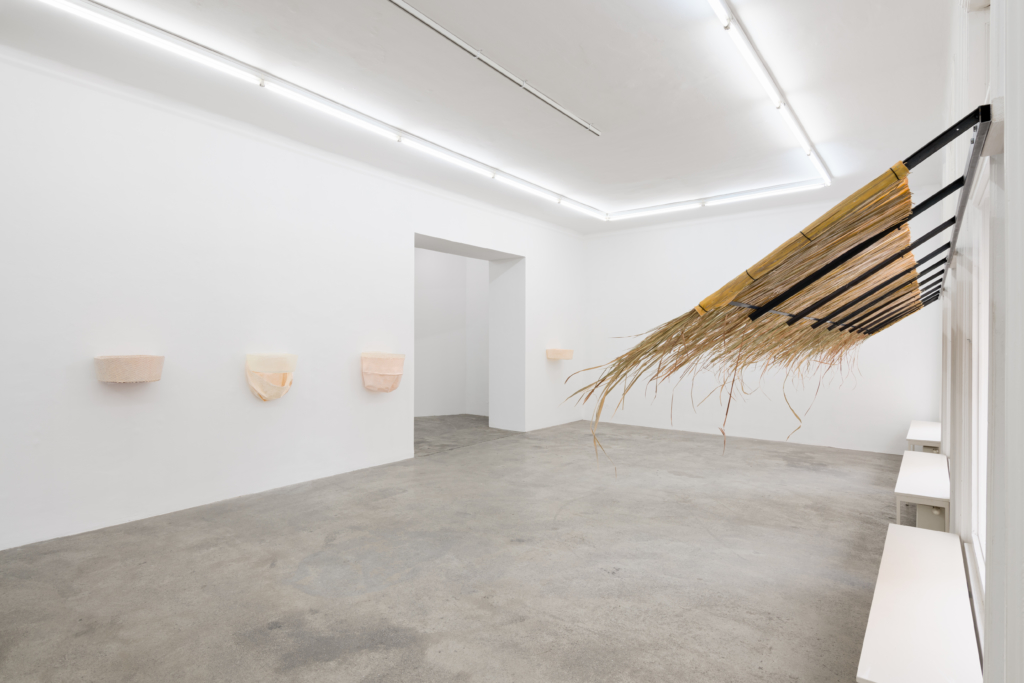 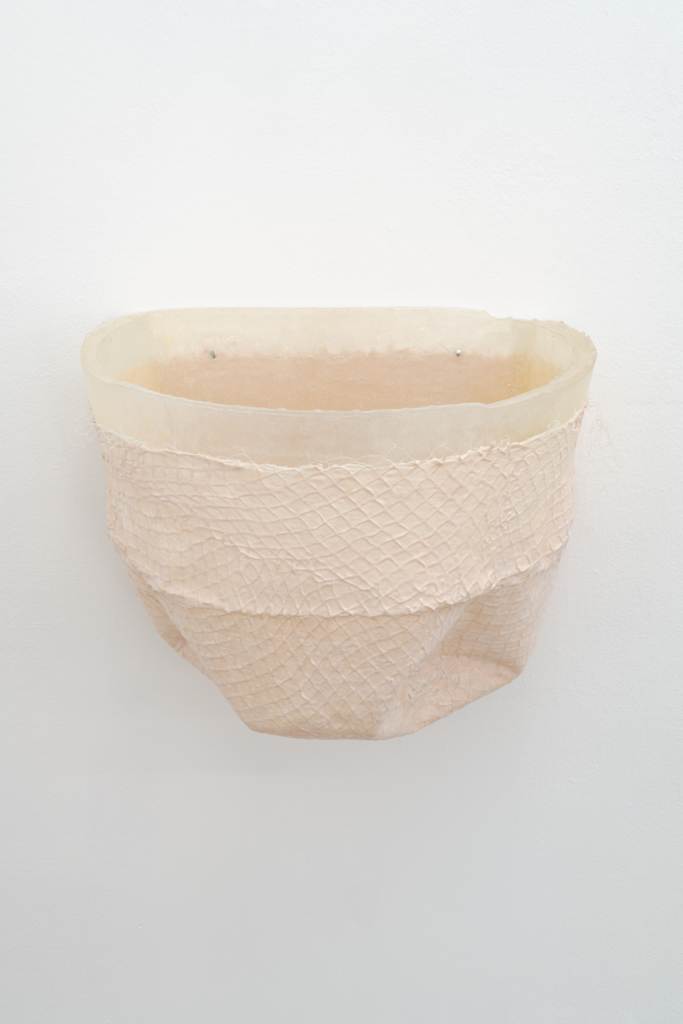 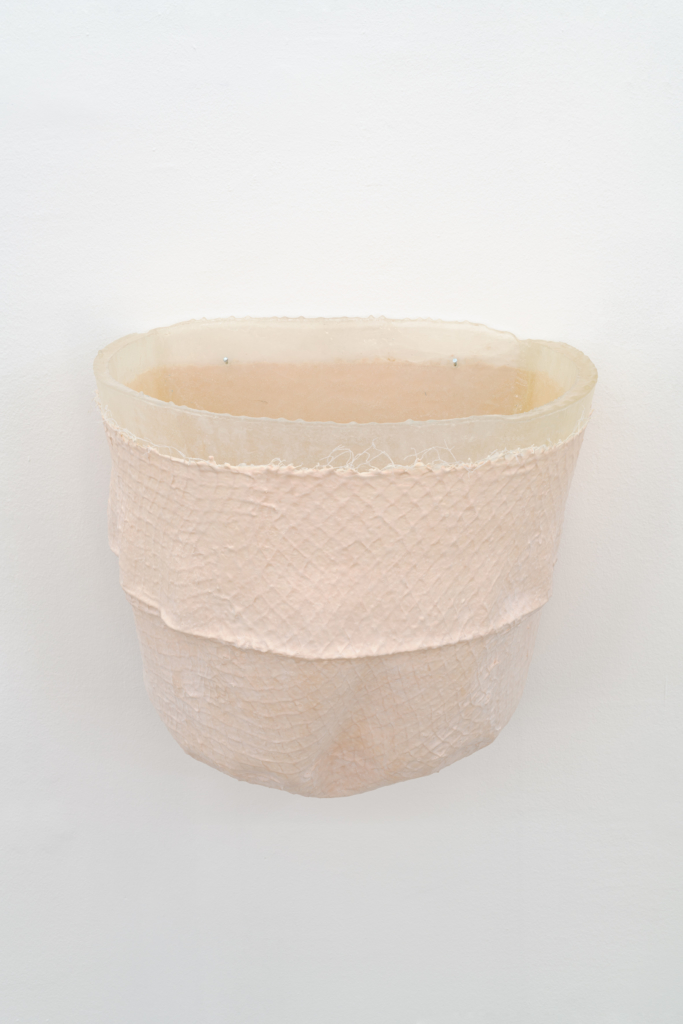 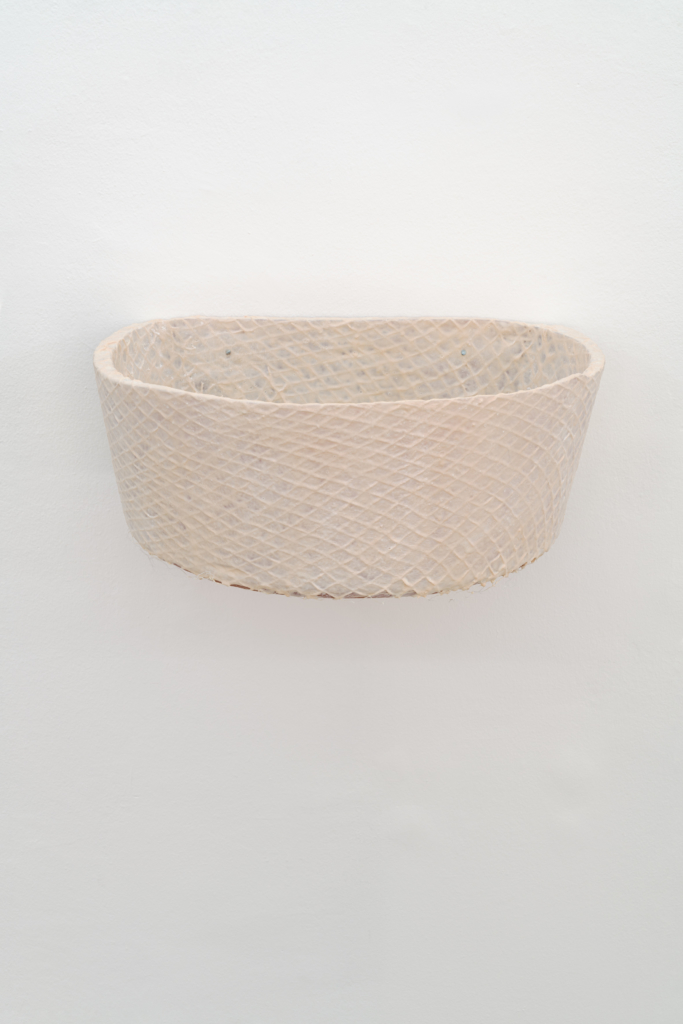 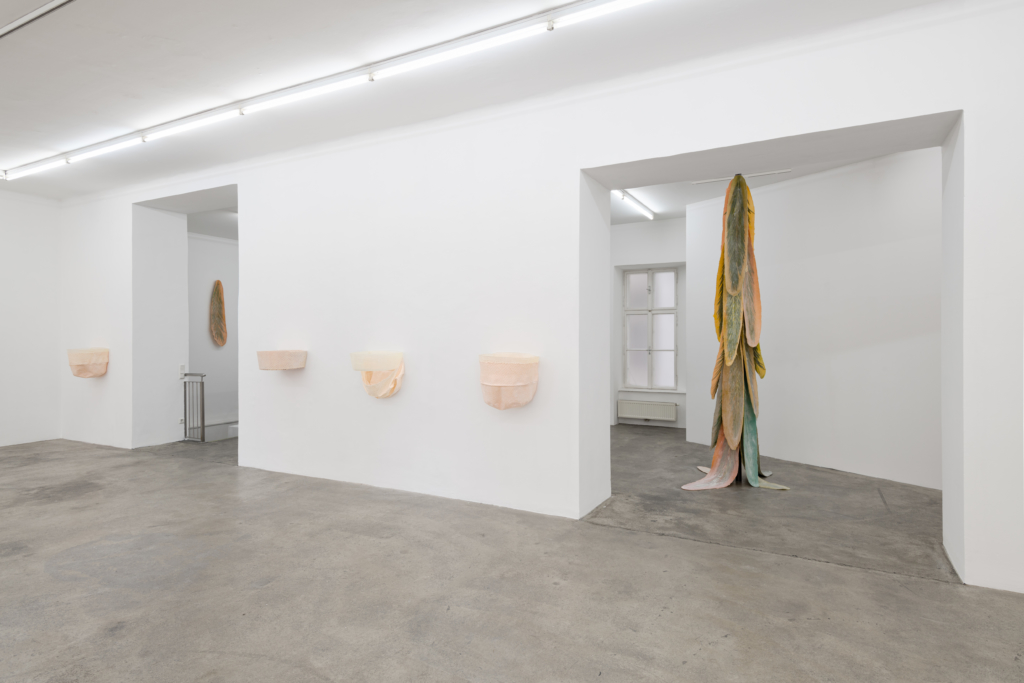 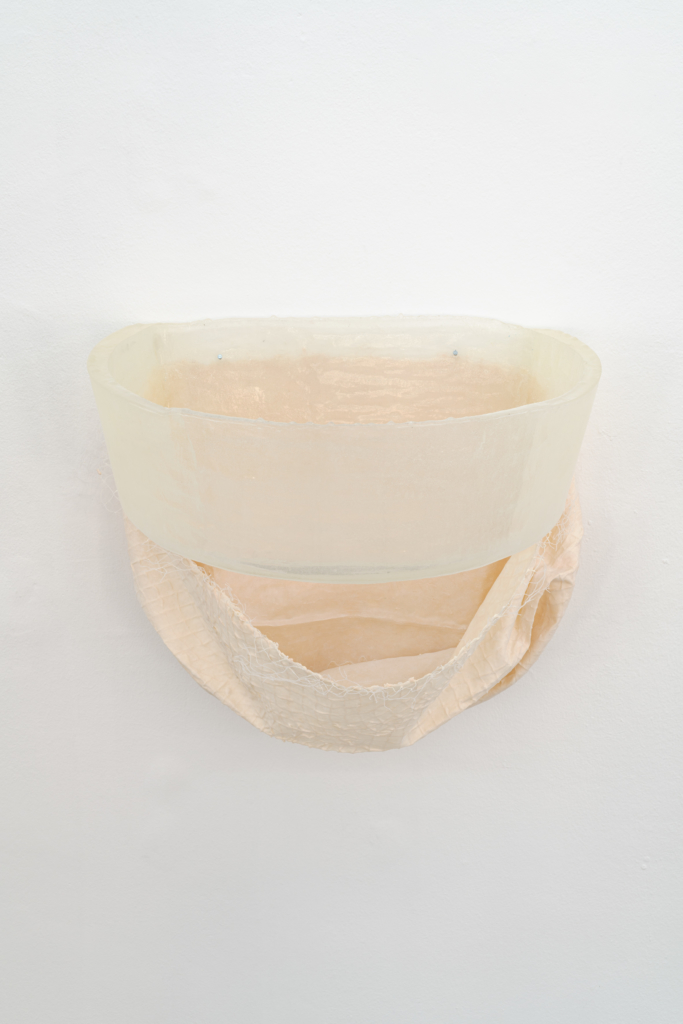 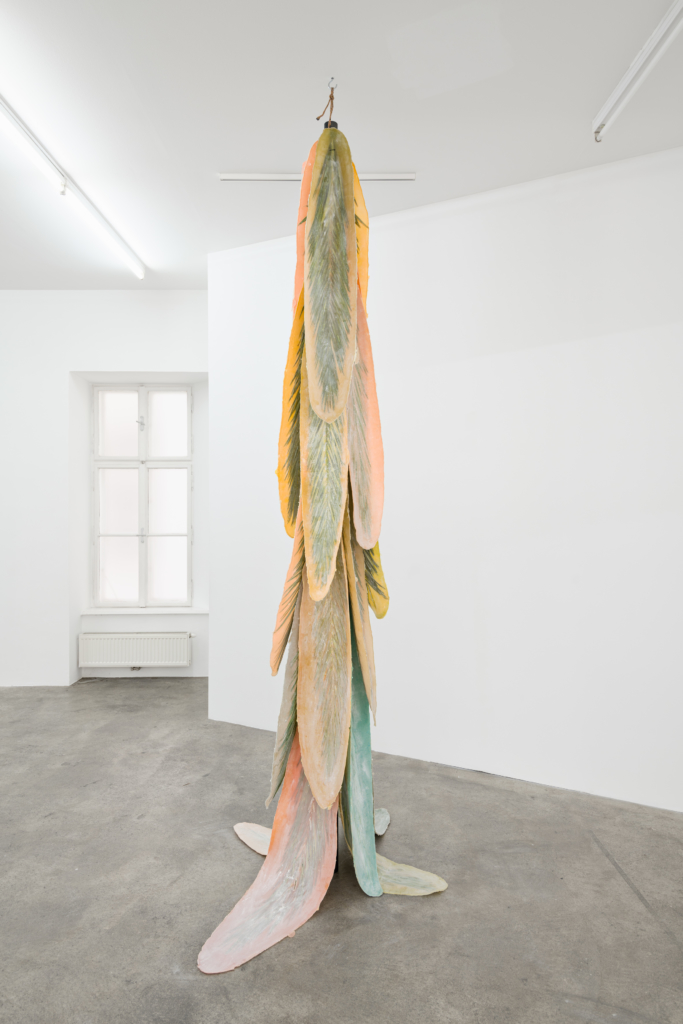 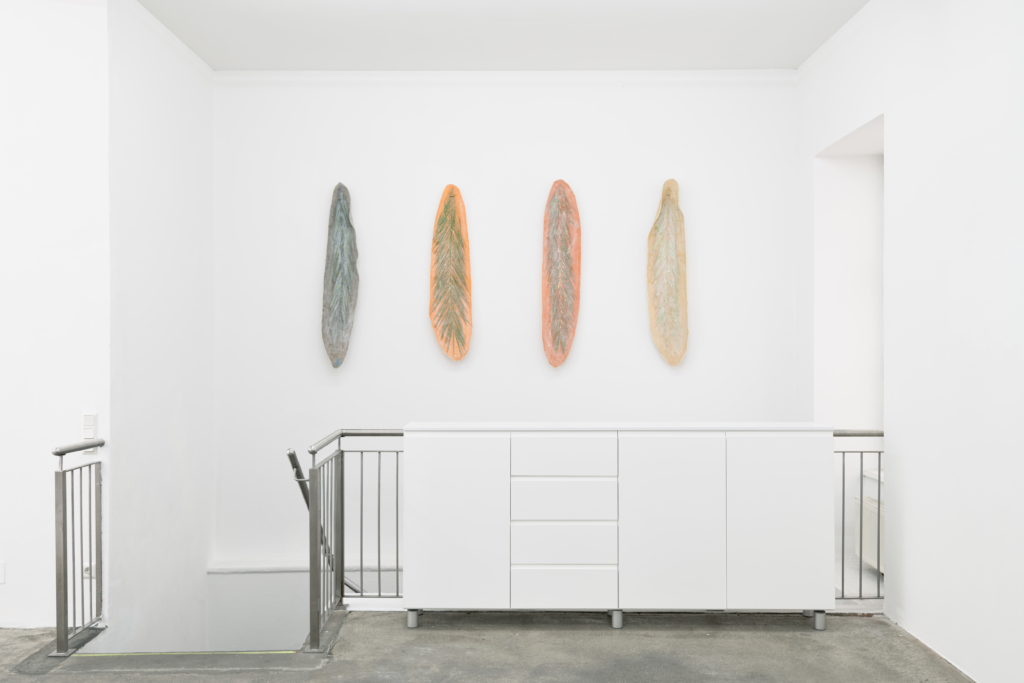 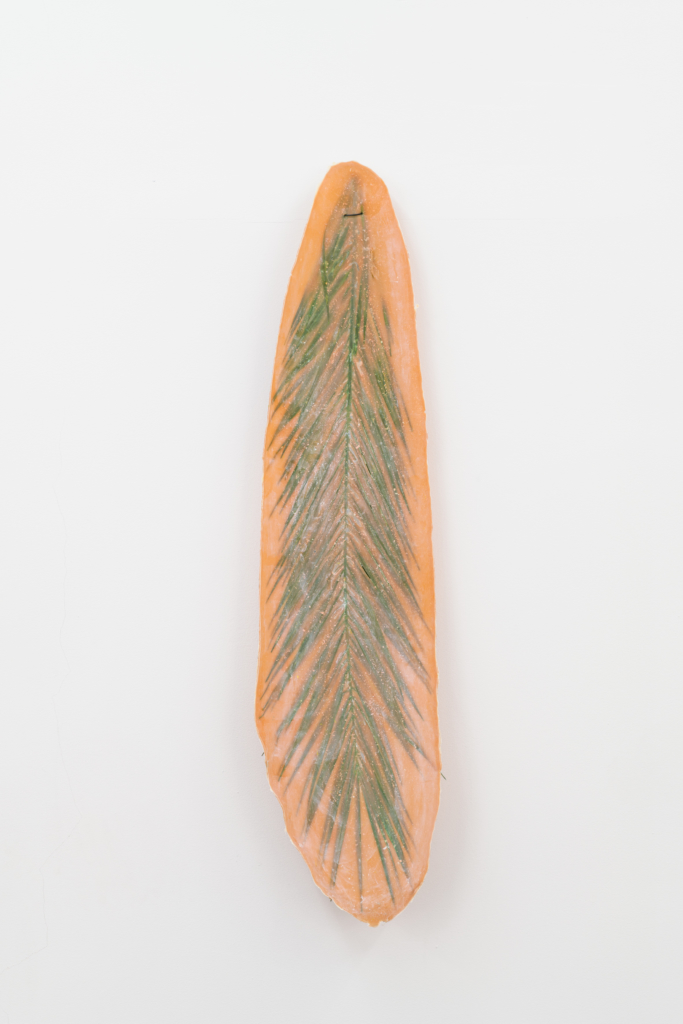 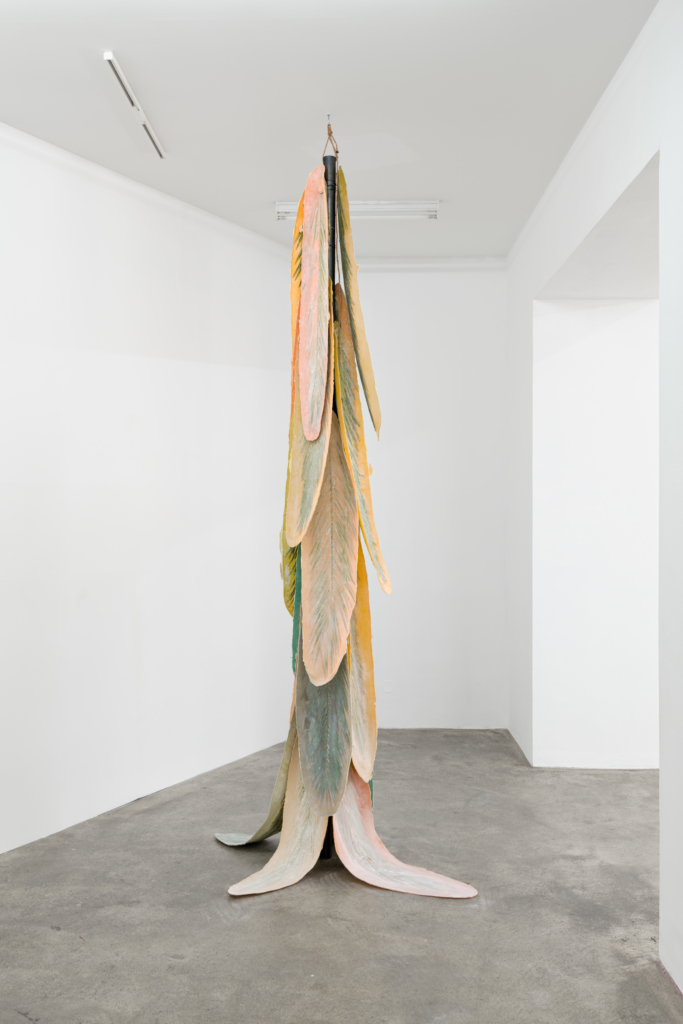 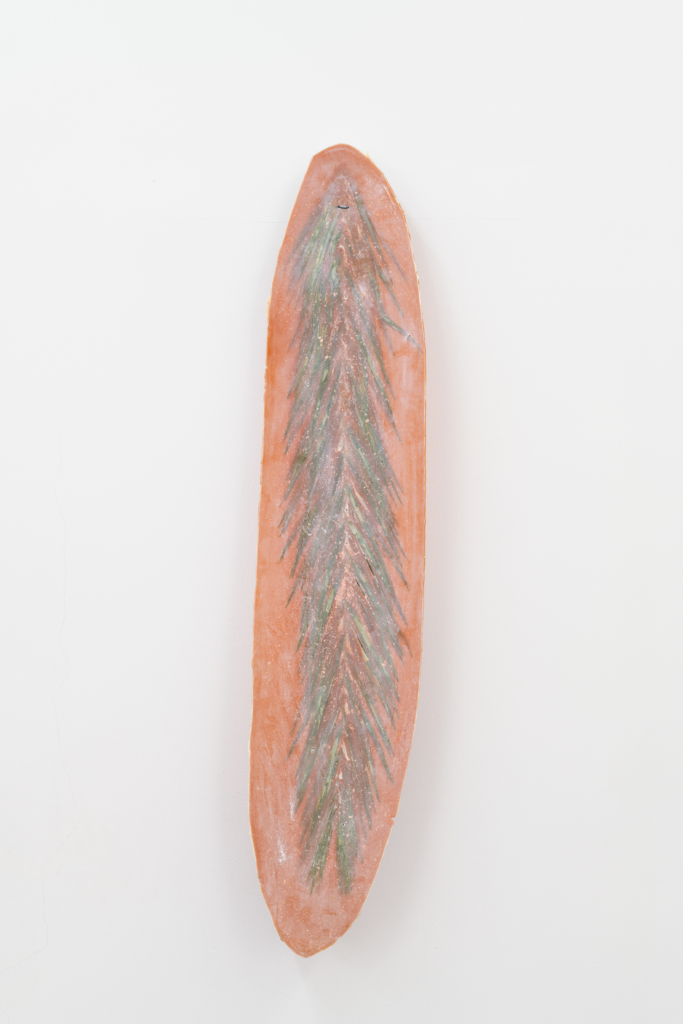 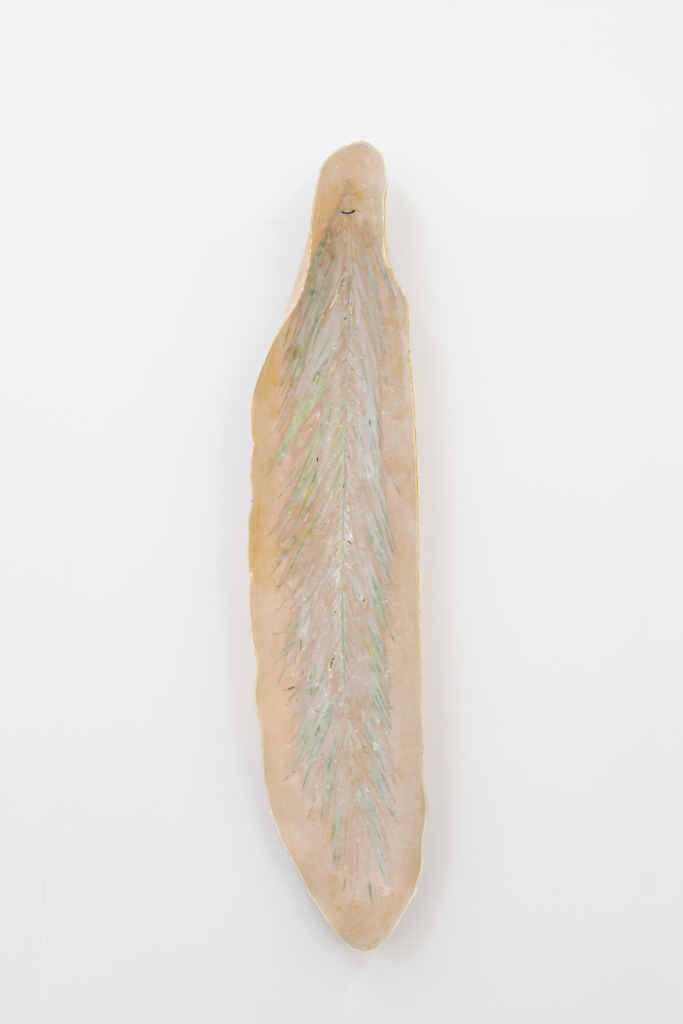 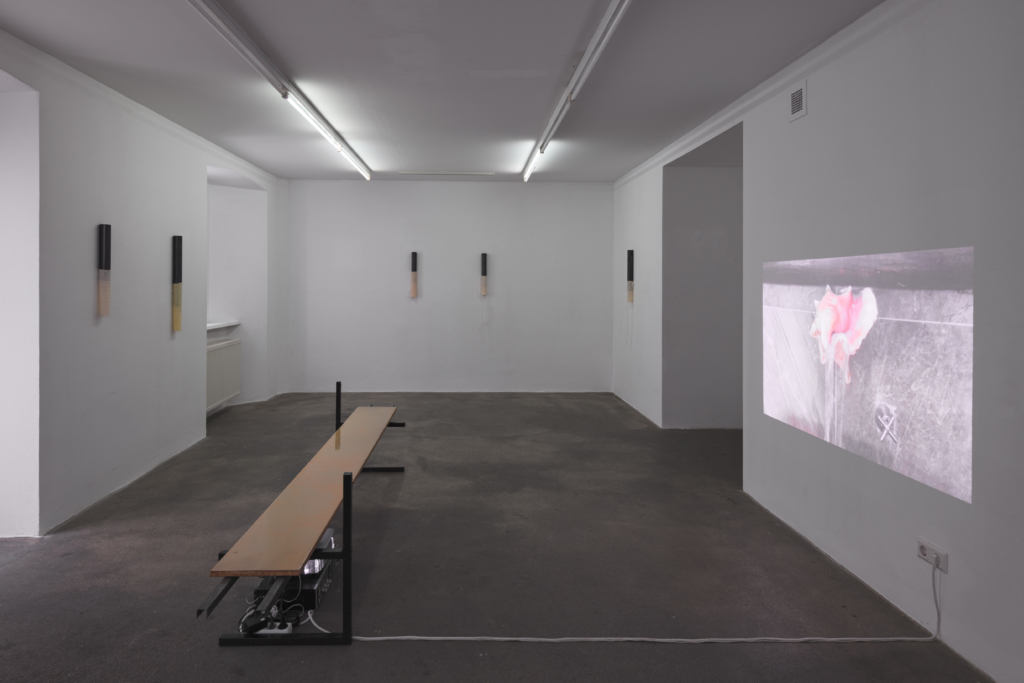 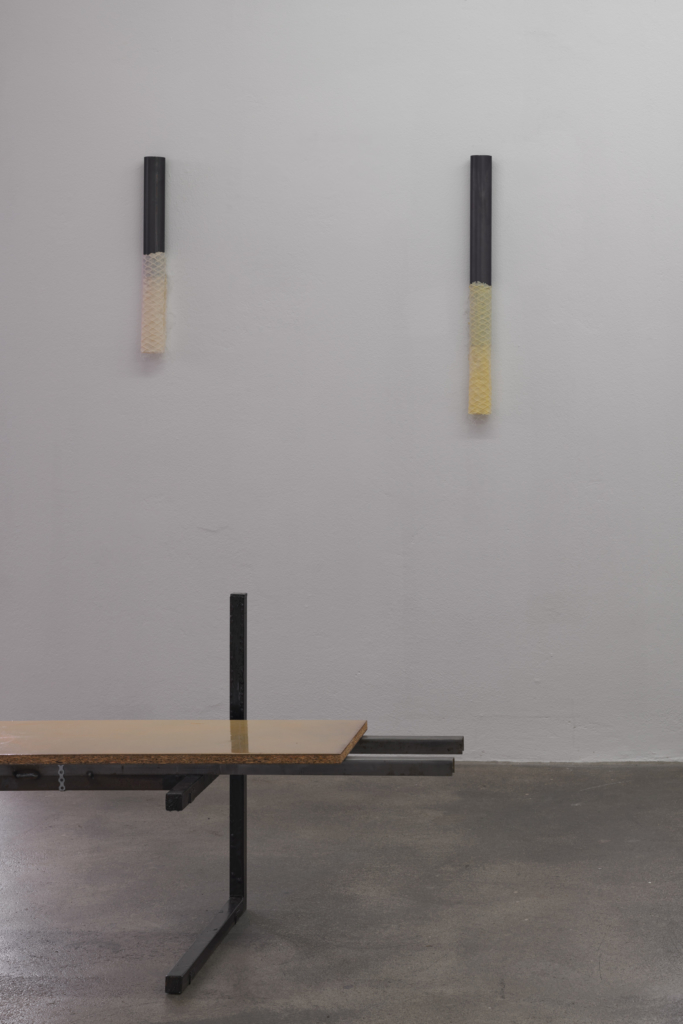 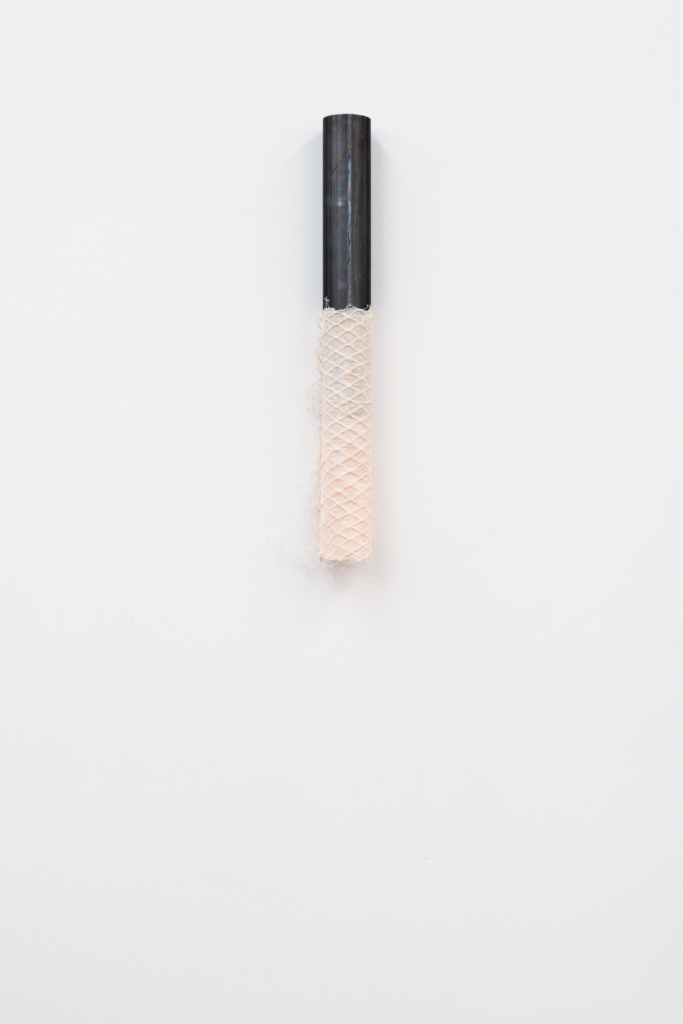 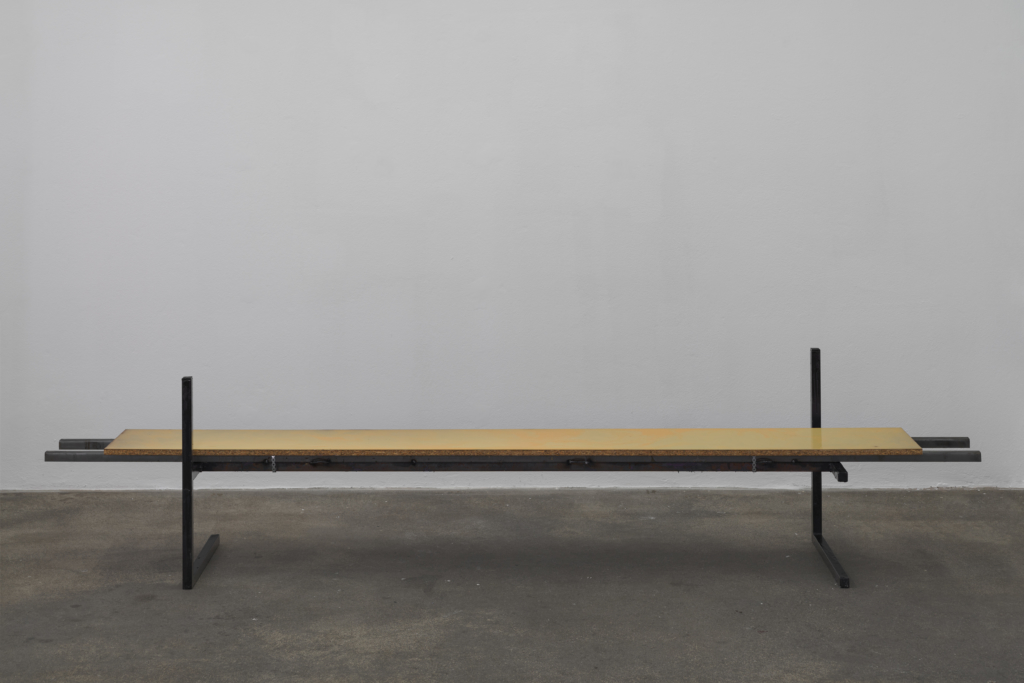 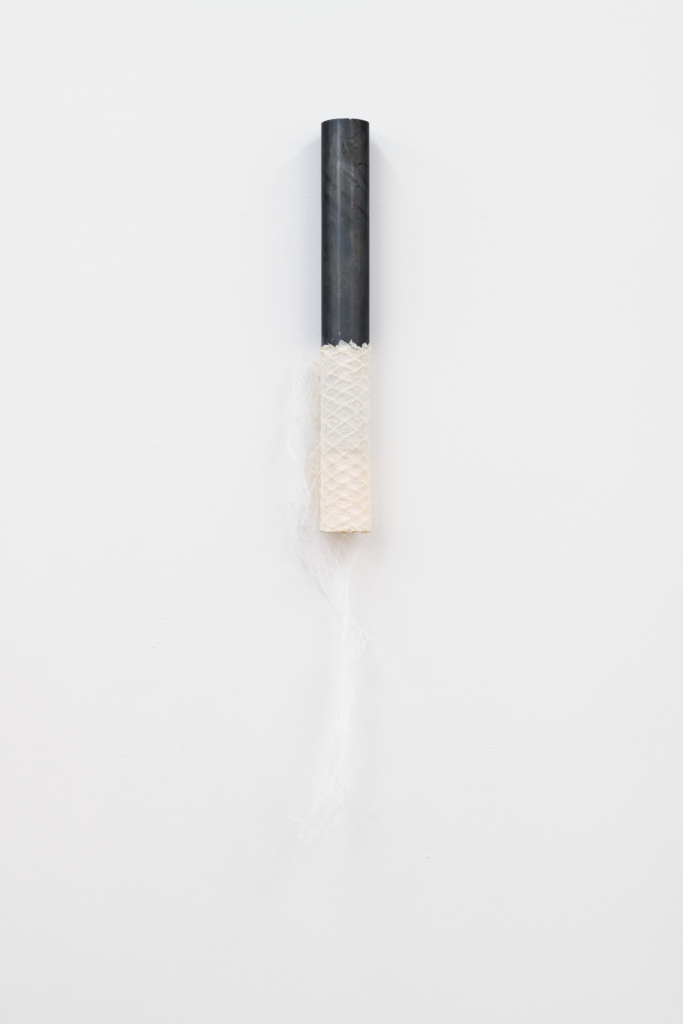 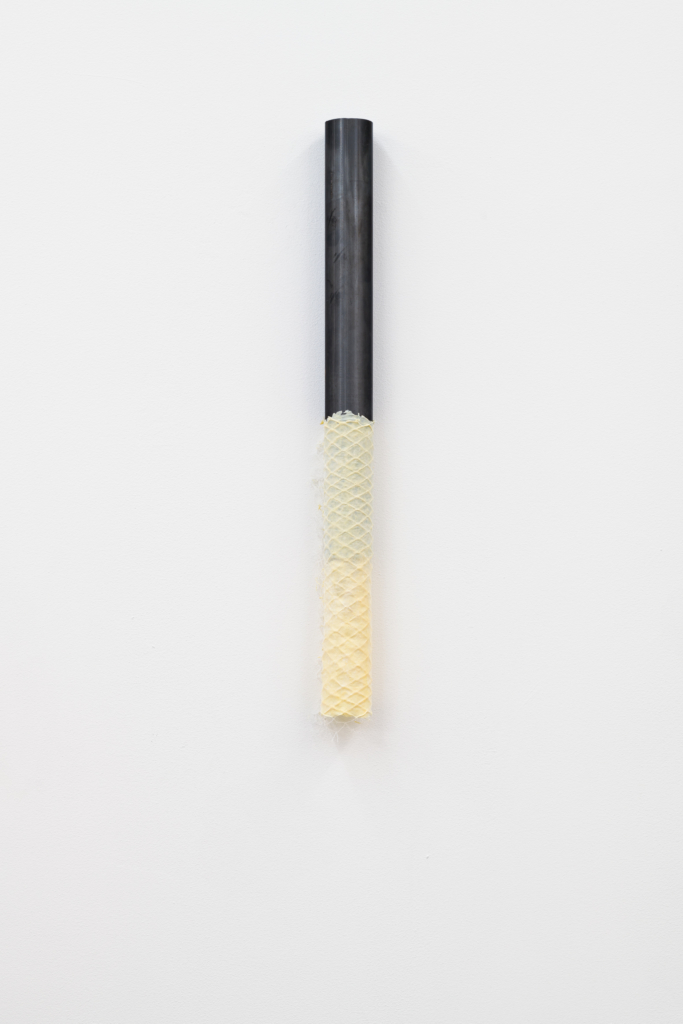 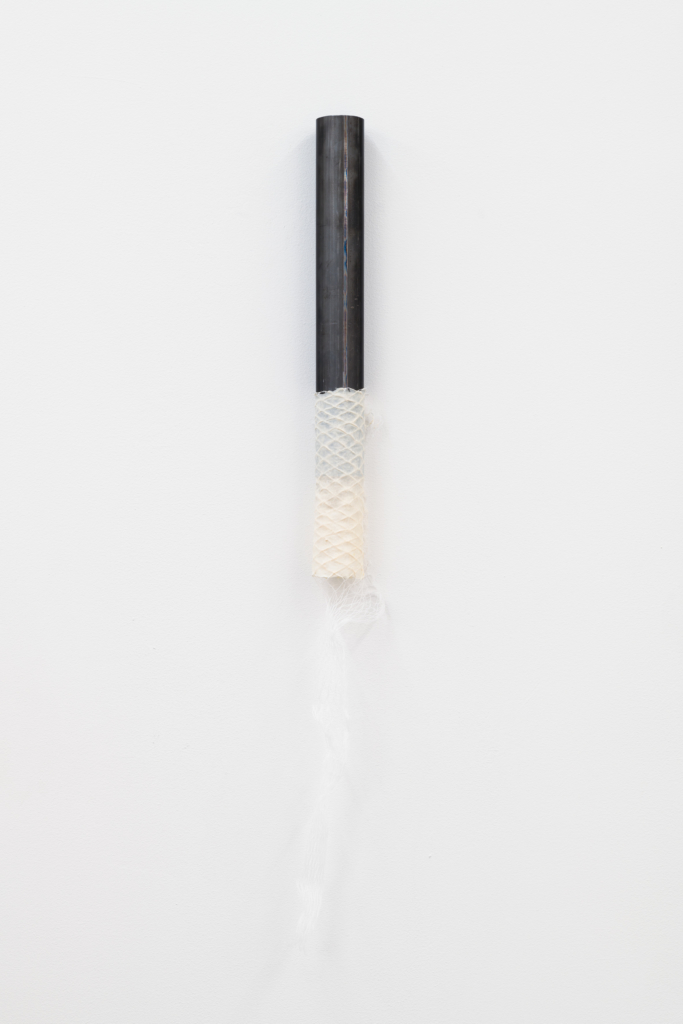 Until I started the conversation with my dear friend Liesl Raff, I never really paid attention to the fact that the word “palm” means two things: a plant and the inner side of your hand.

The aesthetic resemblance of the plant to the body part has caused this name equation, the very occurrence of which reveals the human impulse to anthropomorphise forms in nature. About Palms, Snakes, and Tongues is the second solo exhibition by the artist in the gallery and relies on this imaginative power.

Following this idea, the artist has installed a long roof made out of palm leaves above the benches on the window side of the gallery, turning its’ prominent feature into a designated area to sojourn and observe. Made out of a large number of narrow palm tree leaves soaked in yellow-coloured latex, the lower section of the roof is left unbound, so that the dried plants loom into the room. Like fingers, they tackle the bodies that arrive there to rest. The newly created area interrupts the usual way in which visitors approach the space and was conceived with memories of other architectures in mind. While reminiscent of provisional architecture from southern, mild-tempered hemispheres, such as street booths and kiosks, the piece is also influenced by Luis Barragán. During a stay in Mexico City, Raff visited the studio house of the famous architect and was deeply moved by the attention and detail given to the areas of transit, such as entrances, which are composed through natural light, soothing colours, and clear shapes, so that the visitor immediately feels removed from the outside world. Transition 3, as the work is called, is, like many of Raff’s works, given a certain agency and seeks to trigger and amplify a process of purification and renewal.

Observing the power as well as the fragility of such transitional spaces, the artist started to recognise that they are present not only in fixed structures, but also in the various things one encounters in everyday life. The series Pool on the opposite wall can be seen as a result of her attempt to create such objects using well-considered means and techniques, in which the very process of transition is not only physically and intellectually perceptible, but also made visible and performed in front of the viewer. At first glance they appear to be bathroom sinks, but due to their higher position on the wall they are immediately removed from any practical purpose. The epoxy resin in which the vessels are cast bears a translucent quality and warmth similar to that of amber. Hanging prominently off their edges are pieces of natural, milky latex that, in its original liquid state, was brushed along the forms and then peeled off again. Encountering these works as a visitor is like witnessing an animal shedding its skin. Like Transition 3, these objects pay tribute to the power of renewal, while simultaneously respecting the vulnerability and tenderness present within such a procedure.

Already visible from the entrance area, in the second room of the gallery the visitor encounters a large sculpture fixed between the floor and the ceiling. What at first glance looks like an opulent column reveals itself at a closer look to be a composition of separate elements. While experimenting with various palm tree leaves in her studio, Raff found that the leaf of the Phoenix dactylifera bends itself into a shape of a tongue when soaked in latex.

These multiple tongues tumble down from above onto the floor, evoking the images of trees and cascading waterfalls. While in this playfully emblematic piece these tongues remain silent, and the cascade is dry, the sprawling sound of water is heard from the lower room of the gallery, continuously reminding us that we are looking at pieces dealing with movement and metamorphosis. At the last station of the show downstairs, a video installation titled Shell shows a seashell installed as a water faucet, an object which Raff found in a hotel room during her travels in Mexico. The video stands out aesthetically from the rest of the works, yet highlights a specific understanding of nature prevalent throughout About Snakes, Palms, and Tongues. Abolishing a romantic idea of it, the exhibition instead understands how nature has been domesticated and eventually exhausted through the dogma of progression within recent history.

Raff’s practice creates a language through the semiotics of materials that tell a story about the inevitable and powerful process of change, a process which she not only makes visible but also tangible. One of the metaphors for change is subtly hidden and relies on a closer reading of Raff’s frequently used material: latex. The “tears and blood of the tree,” as the natural product is also called, are only set free after the tree has been cut open and “wounded.” It is through such considerate attention to the genesis of things that About Palms, Snakes, and Tongues becomes not only a tale about the relationship of nature and culture, but also one of the potential that lies within hurt, grief, and renewal.