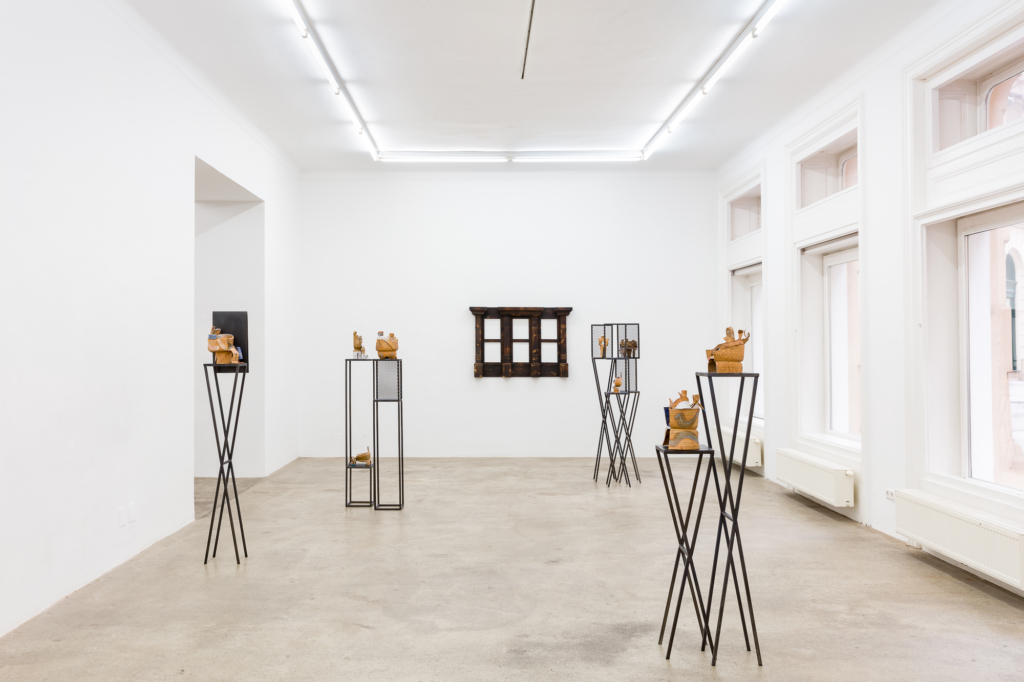 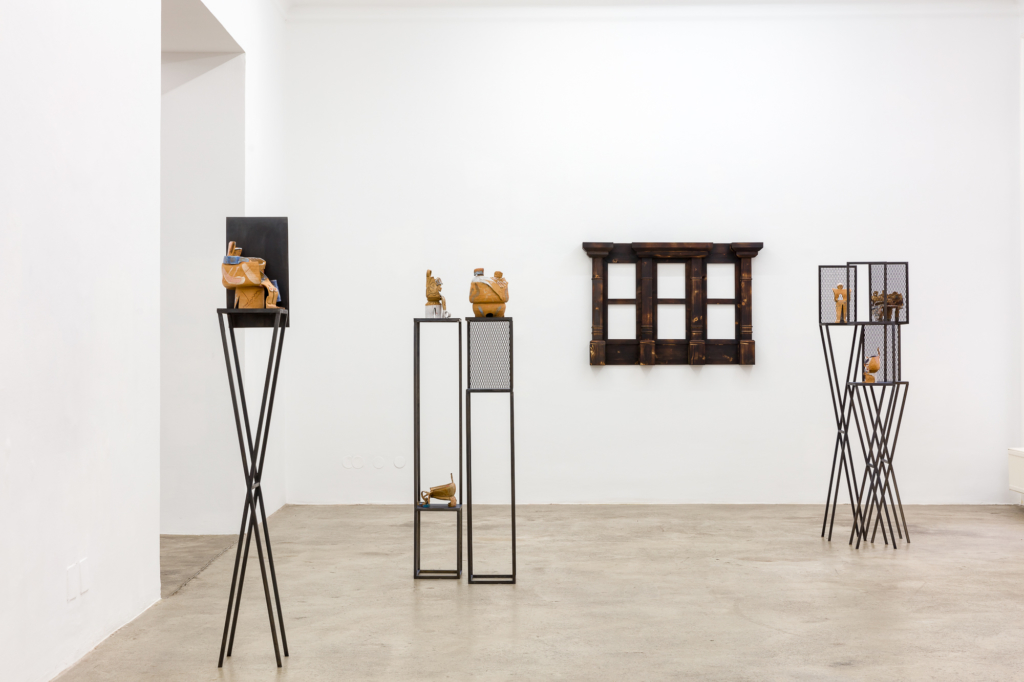 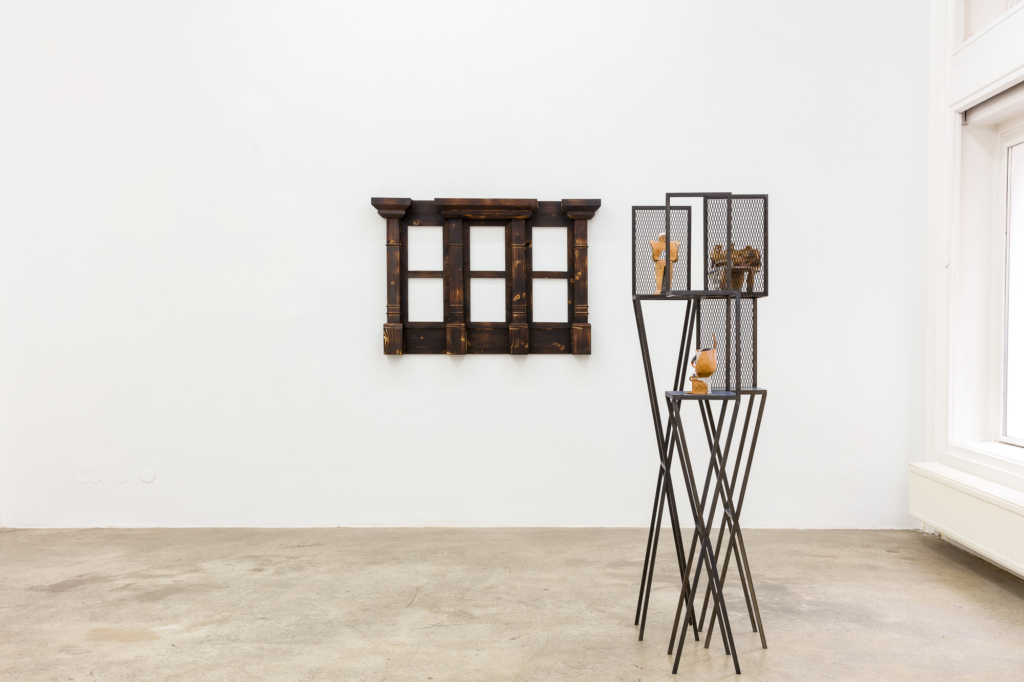 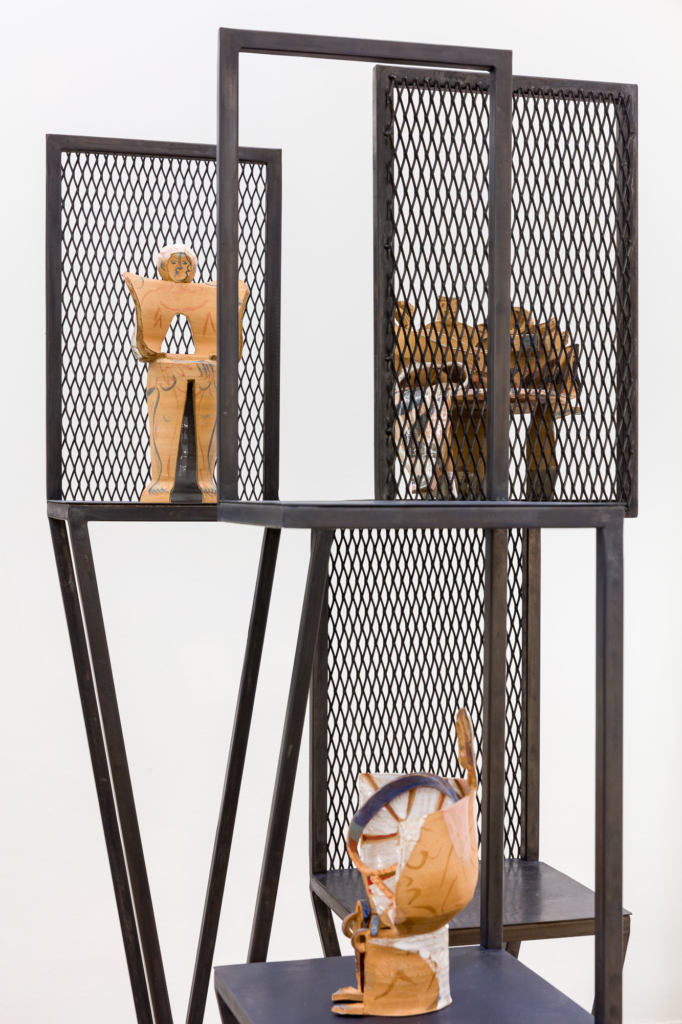 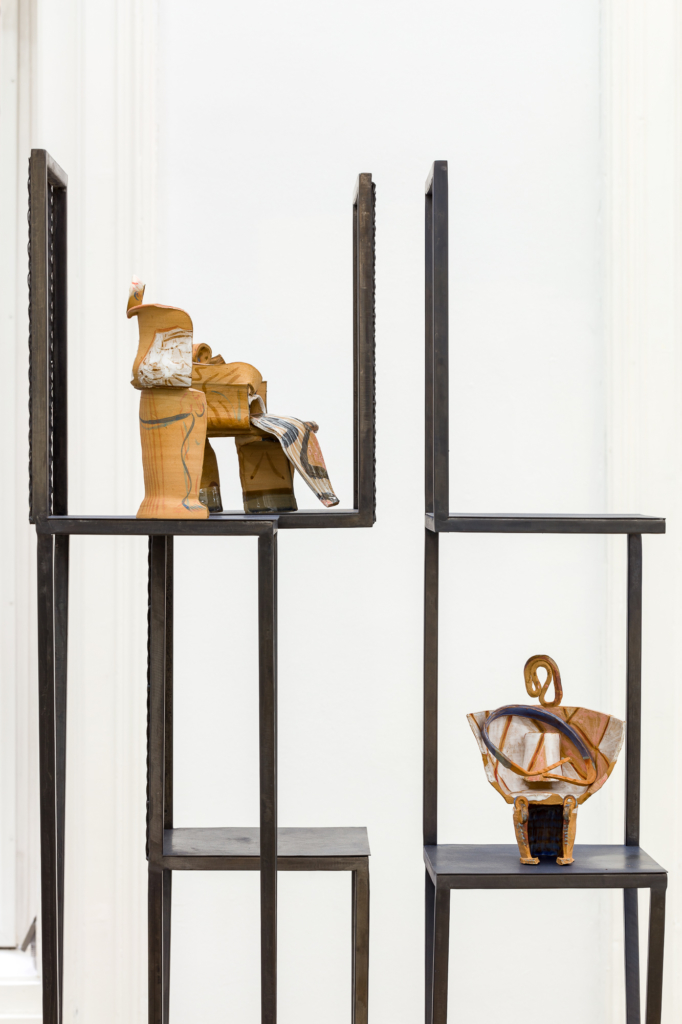 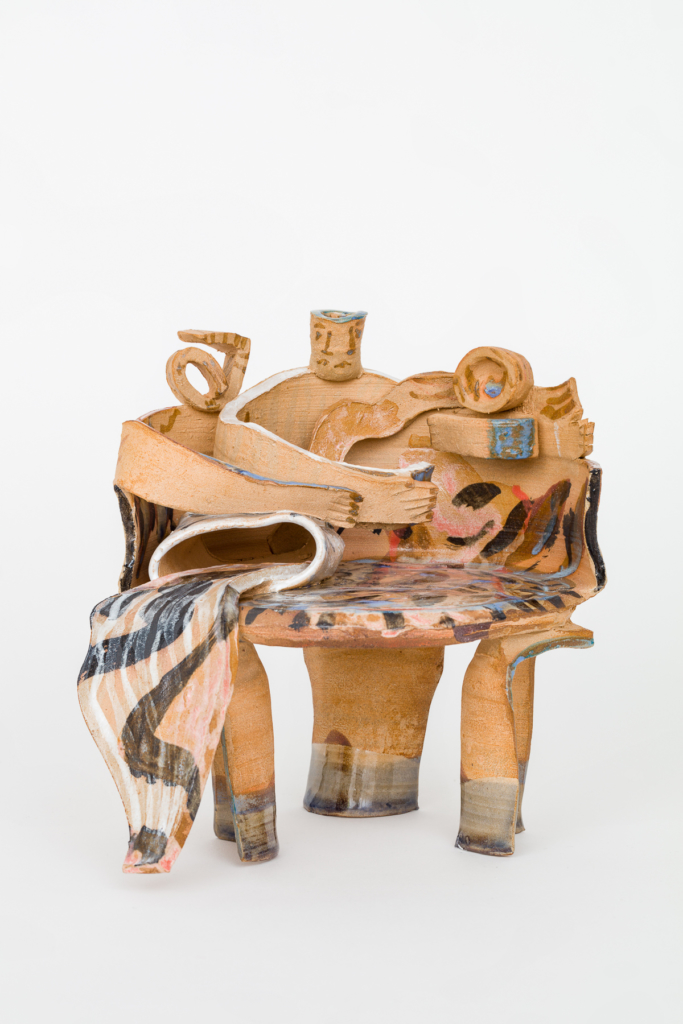 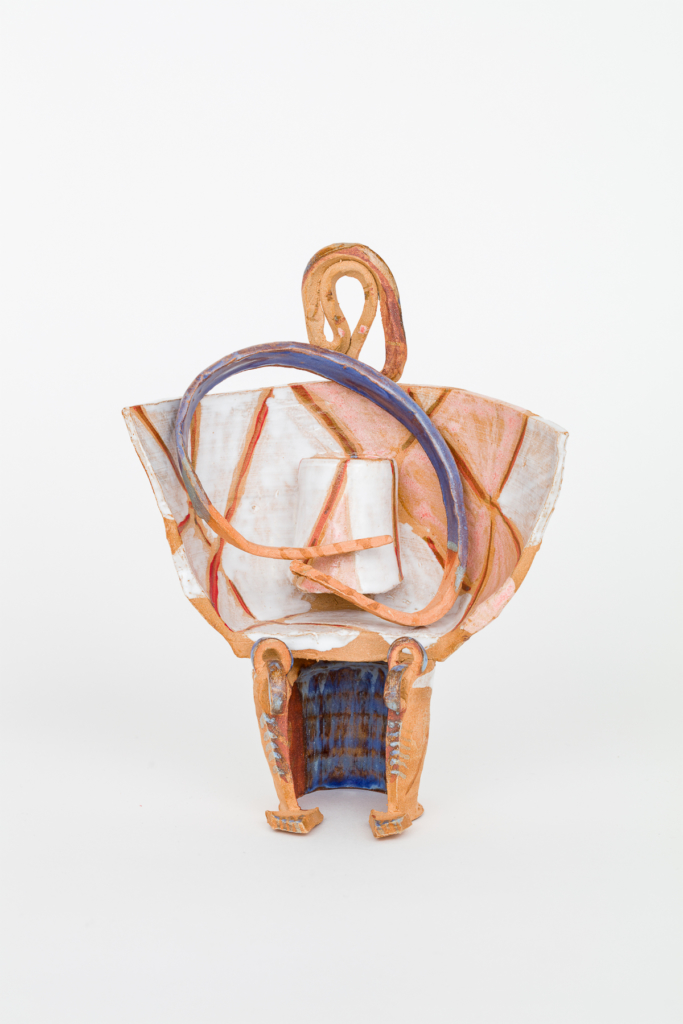 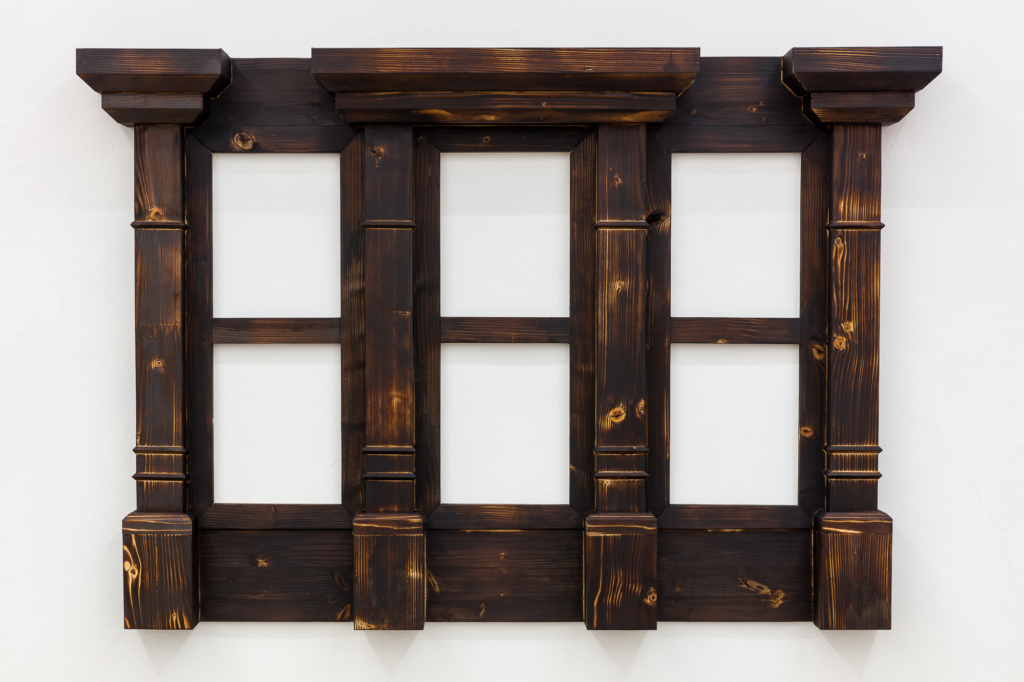 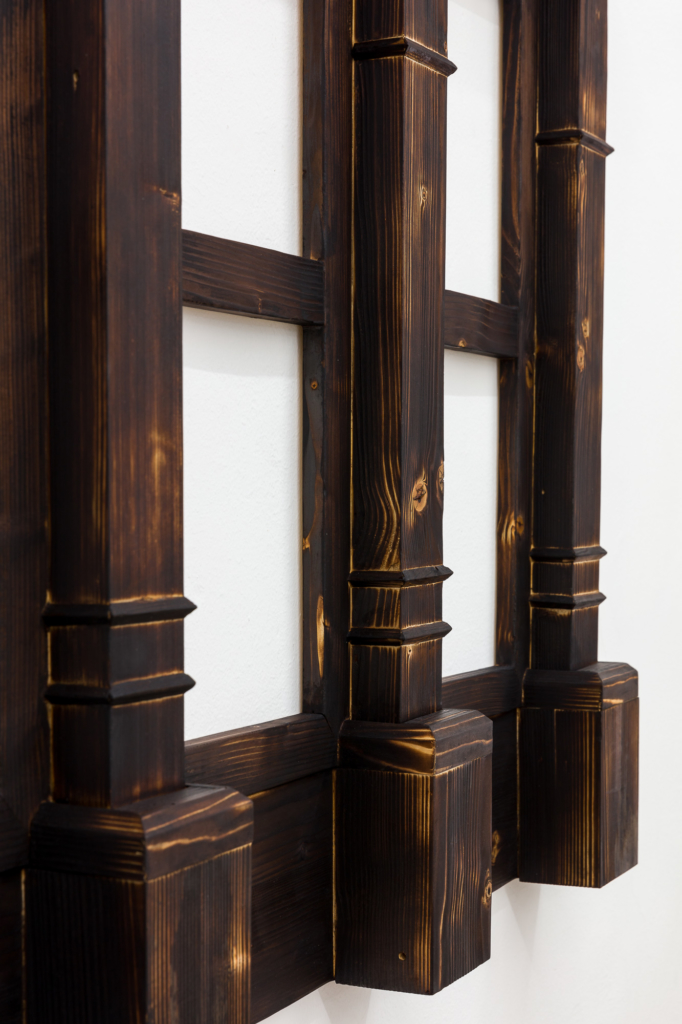 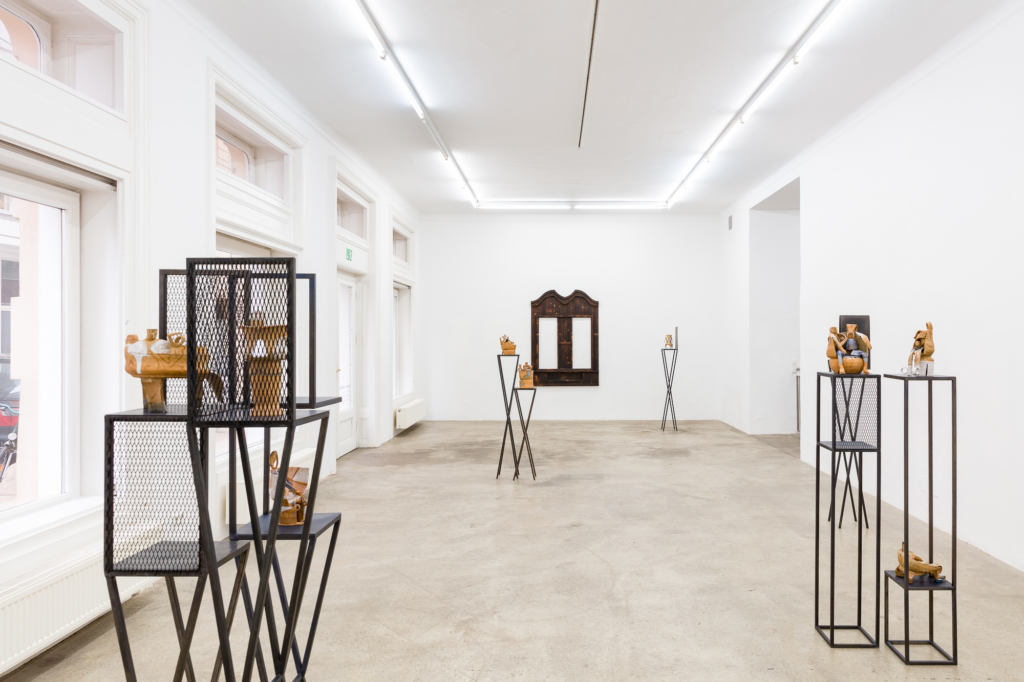 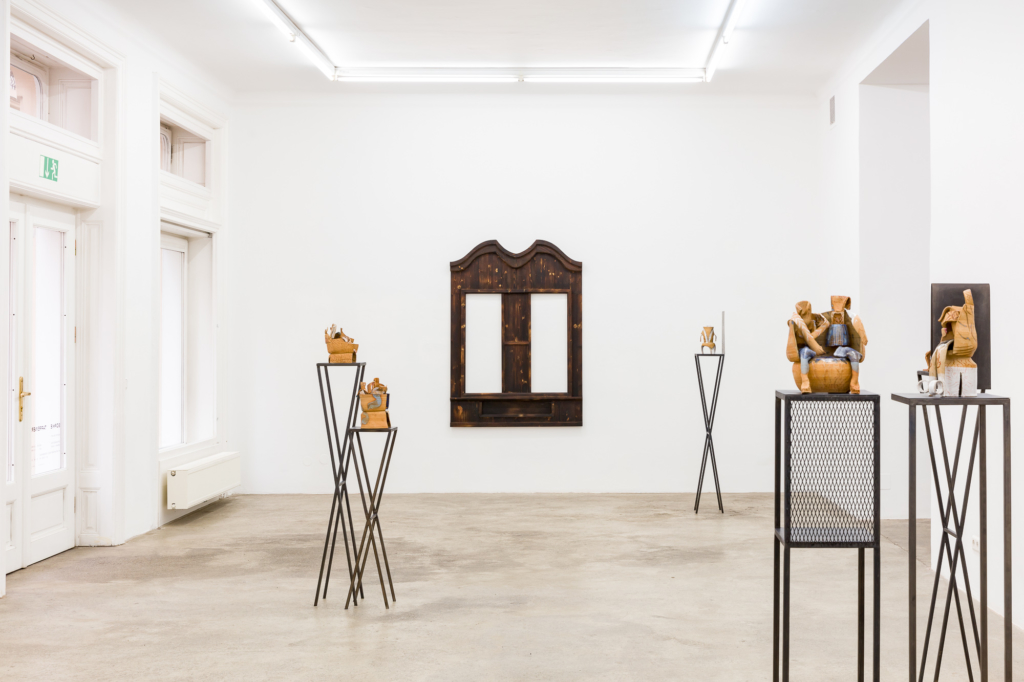 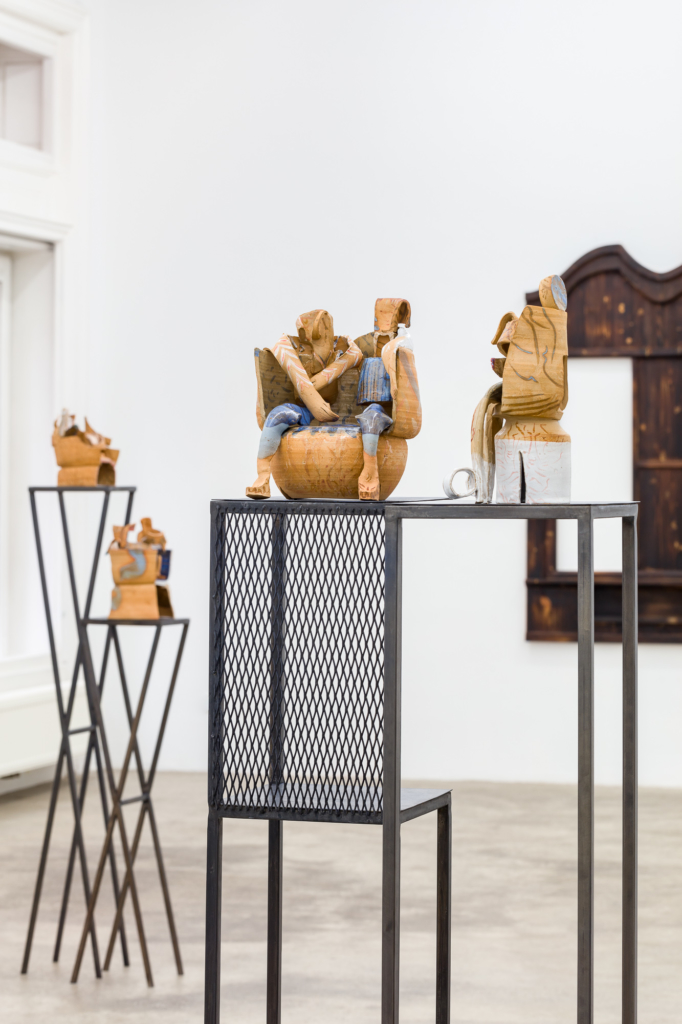 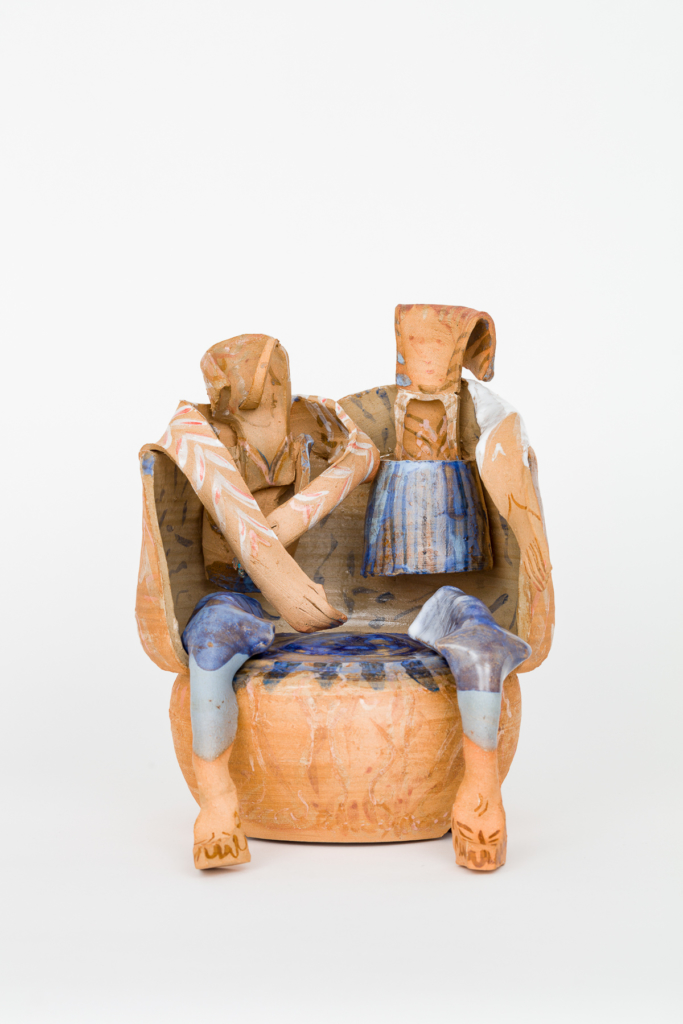 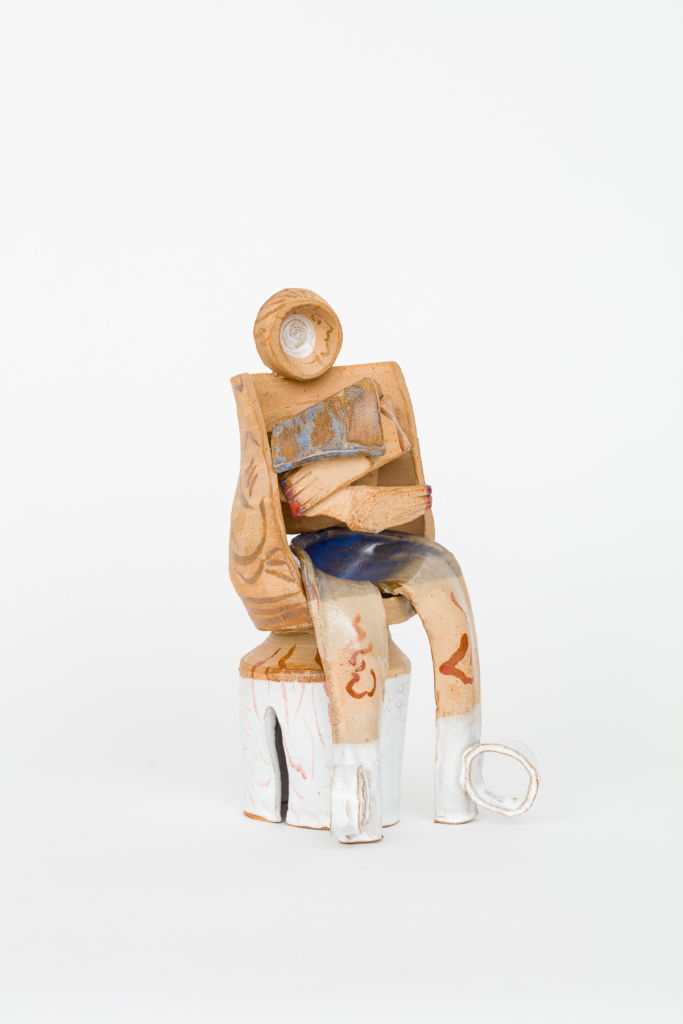 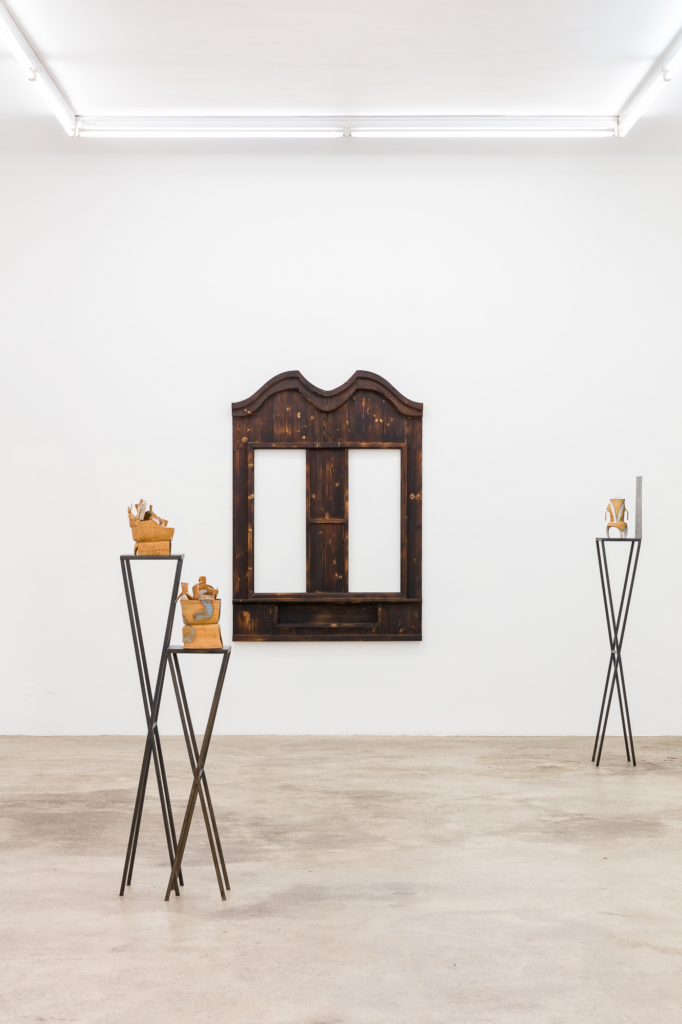 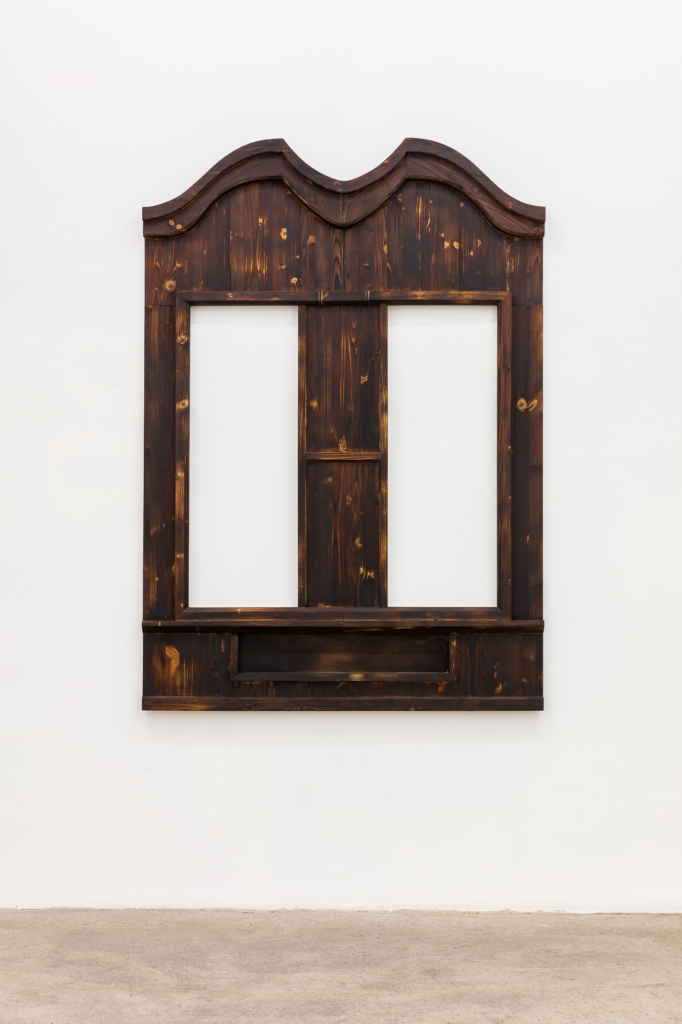 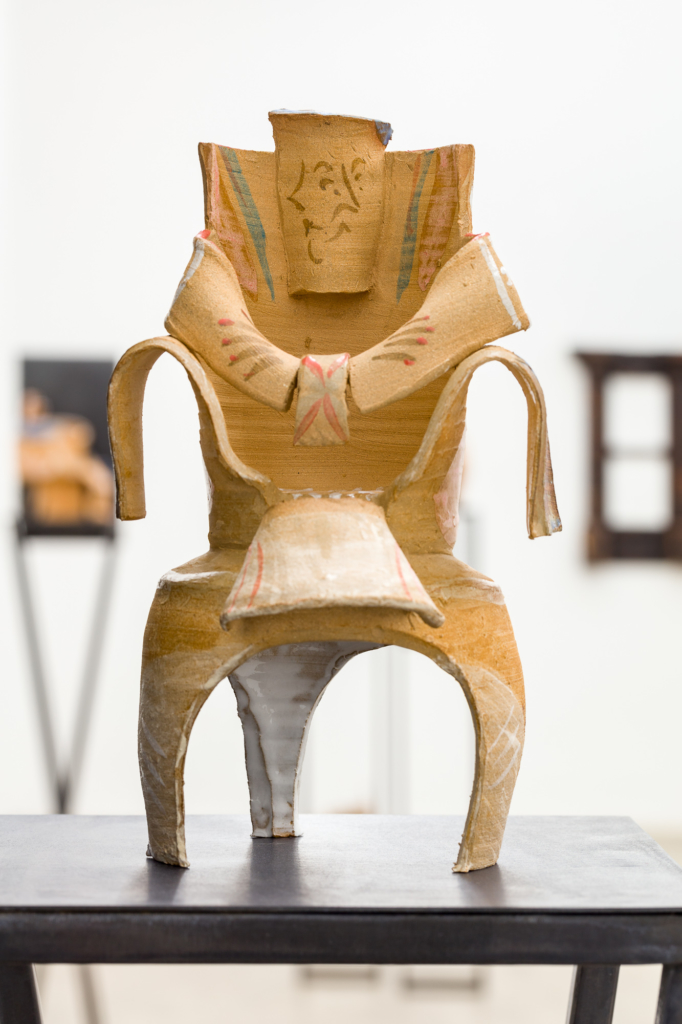 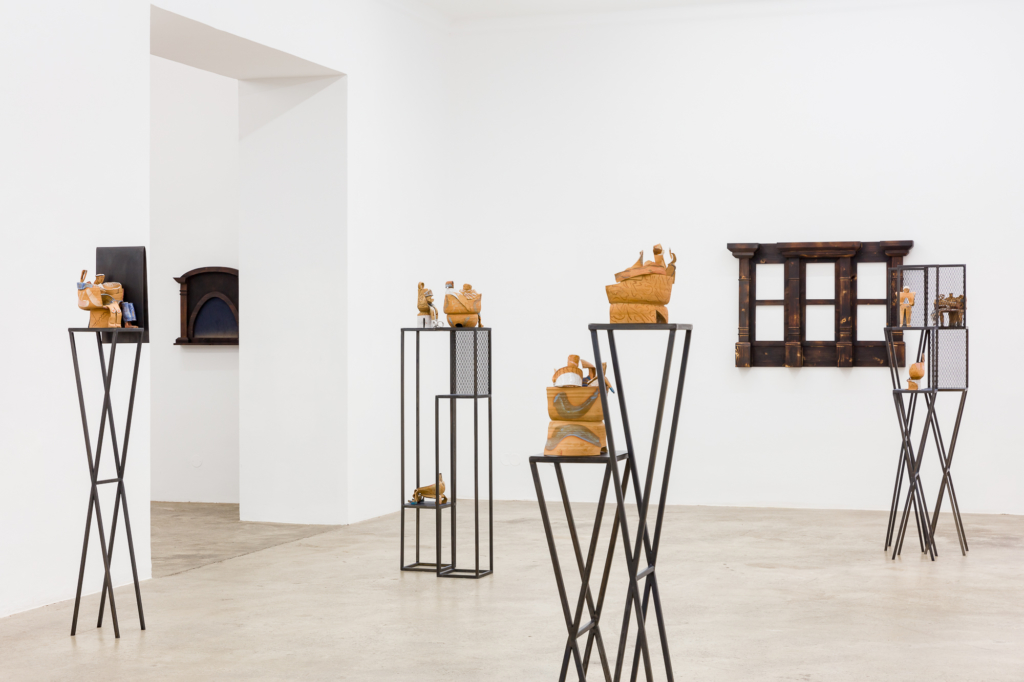 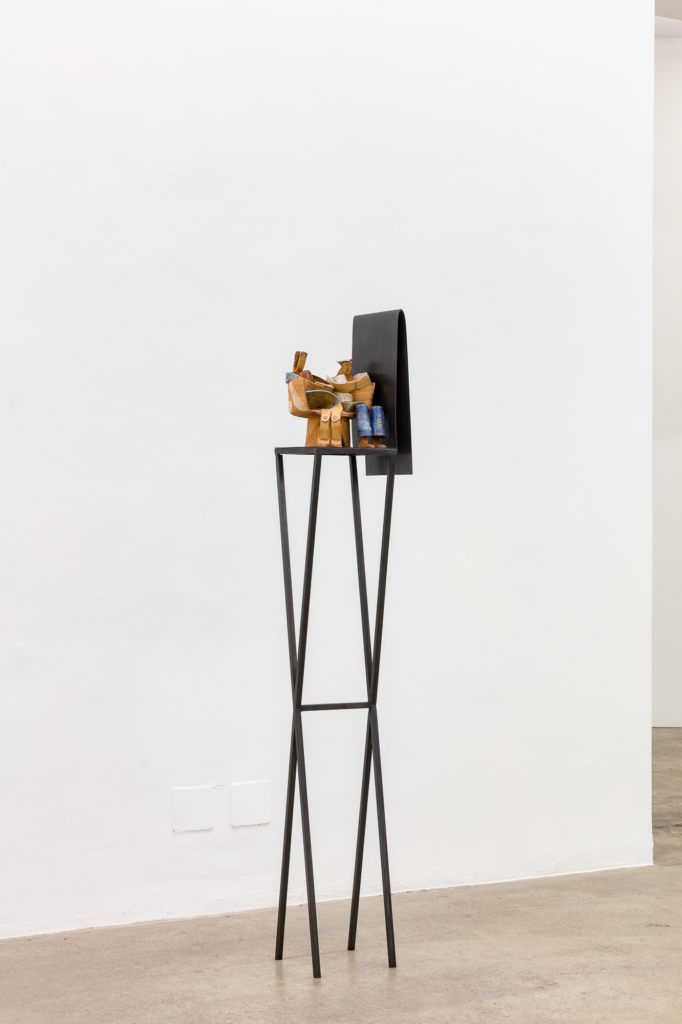 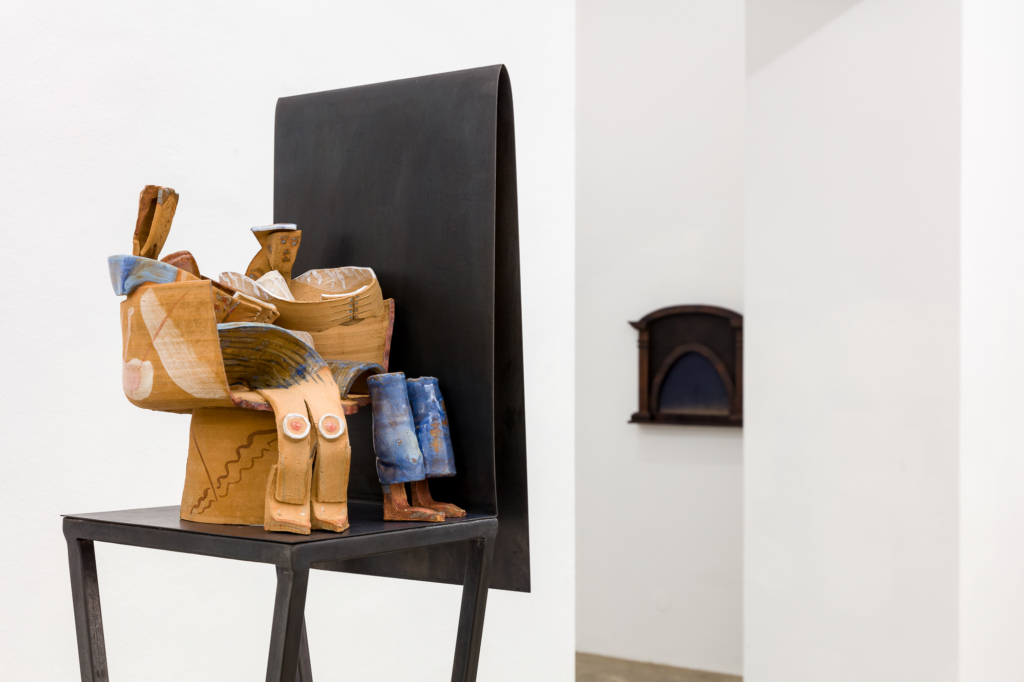 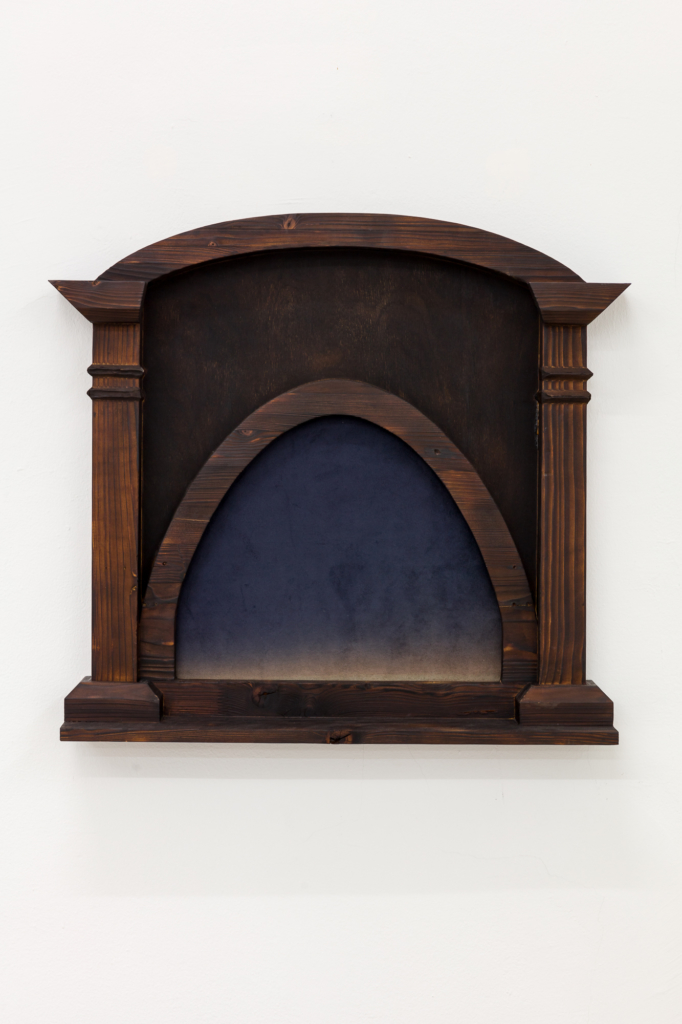 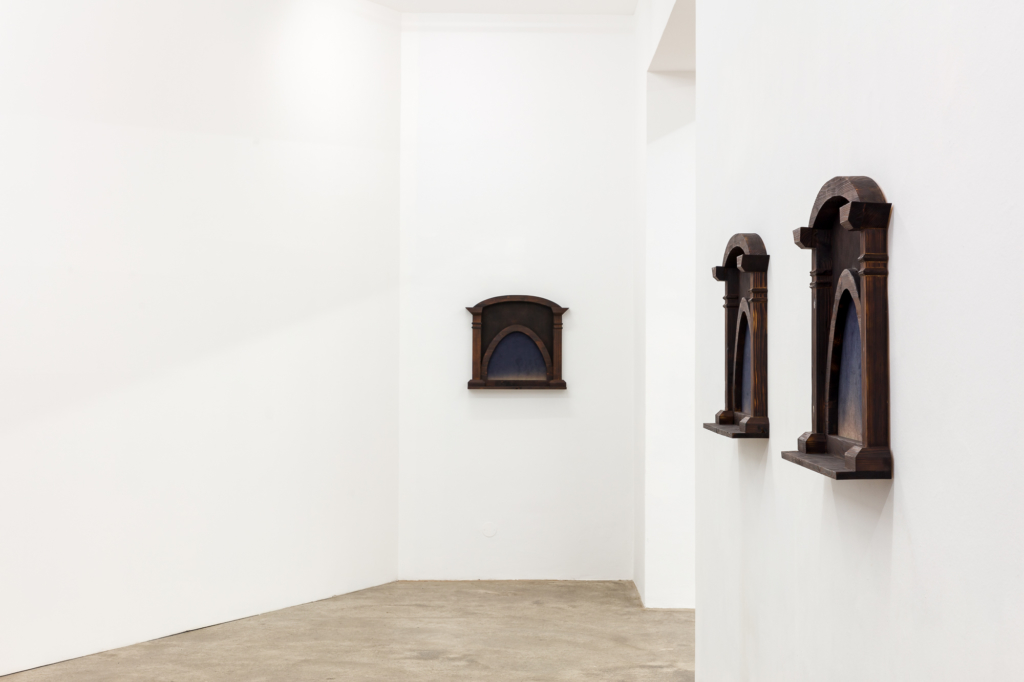 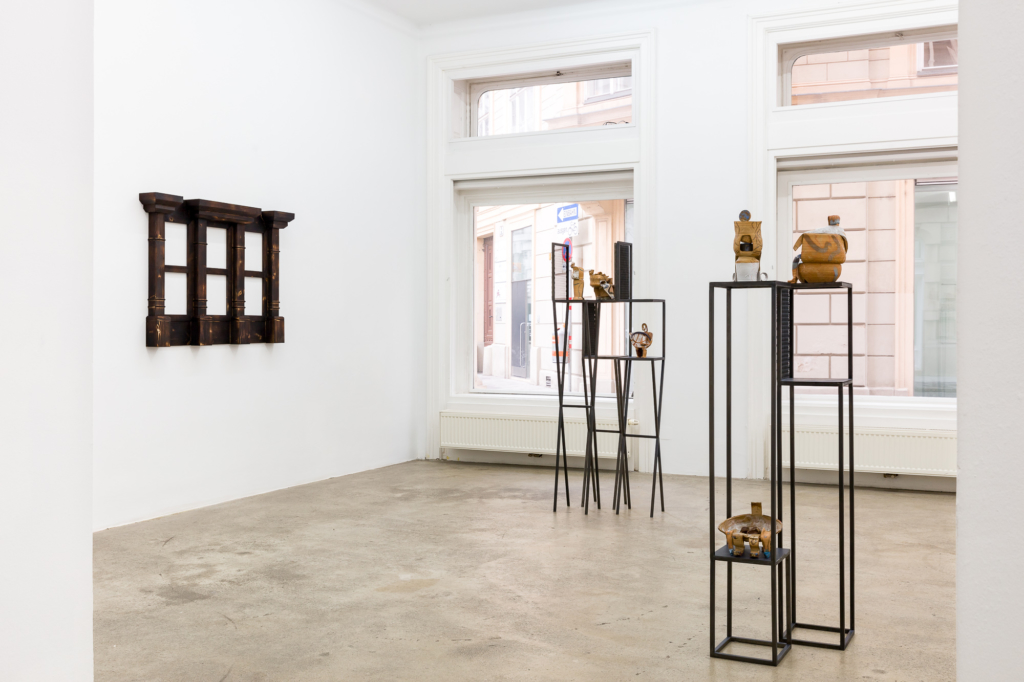 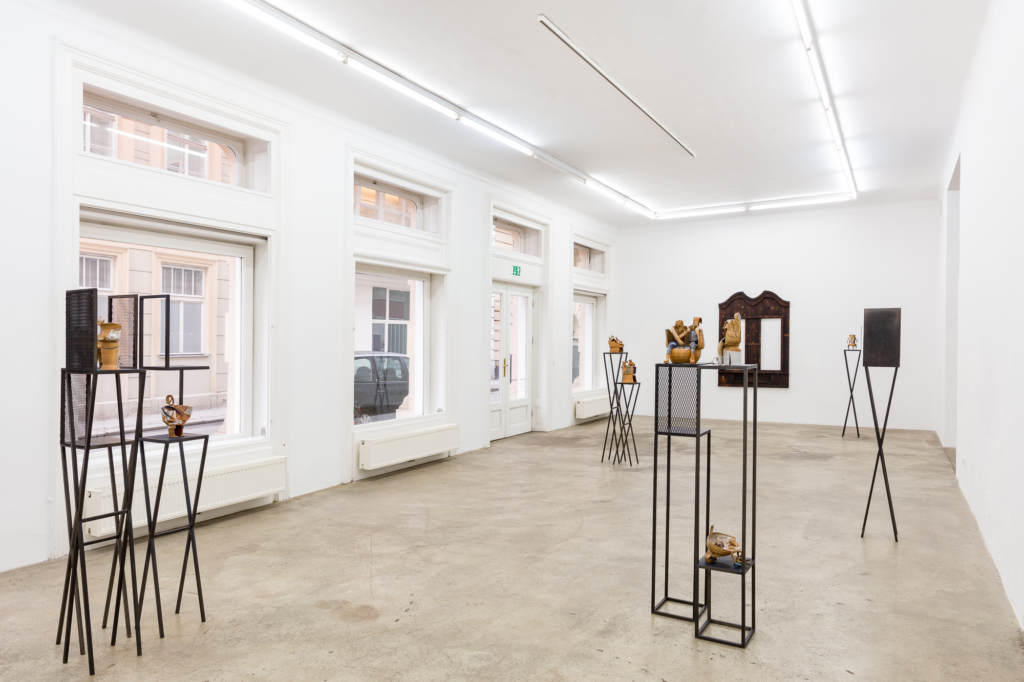 Entering one’s own closed architectural space makes entering a private mental state possible. It is within this private space that we develop our relationship to the world, as well as our relationship to ourselves. The promise of privacy in this protected zone allows us to relax, sink deeply into our armchairs, and let our thoughts wander. Side by side, door by door, room by room, we are stacked on top of each other on several floors. Living together in an orderly and separate coexistence, we are alone and yet simultaneously interdependent. Does a society start with only two or three people? Or does the attitude of an individual already stand for a community? Even within our rooms, we are confronted with the positions of others and the gazes of the silent observers around us. Everywhere we look, eyes look back.

For the exhibition Pensive State, Irina Lotarevich and Anna Schachinger have positioned ceramic figures on metal structures throughout the gallery. The metal structures, a collaboration between the two artists, resemble tall iron chairs or strange, multi-story architectural complexes. In order to form her ceramics, Schachinger cuts into the clay mass on the throwing wheel, and by turning its inside outwards and the outside inwards, defines and grows the sculpture’s surfaces from a common space. The resulting forms, hybrids of humans and furniture, settle down comfortably on the floors of the metal constructions. These interwoven bodies are turned to each other in constant communication and relation. Only then do they separate themselves from their surroundings and create an exterior. The ambivalence of their unity consists not least in a radicalized privacy and the potential to try out new discourses in a protected space. They perform what it means to be publicly private.

For this exhibition, Lotarevich has produced wooden wall works which reconstruct the forms of various ornate exterior windows spotted in Vienna. She darkens the wood frames by burning them, a process which has been historically used to weatherproof and preserve wooden exteriors. The openings within the frames remain empty, or, in some cases, filled with a navy-colored textile. The opening is a cut, a void, a rift, an empty position – which is in this case “filled” with the gallery wall. The work absorbs its location into itself, while at the same time signifying a membrane or a portal between inside and outside. It is ambiguous whether the windows are agents of surveillance, or the objects of it.

In addition to having a functional aspect in building a house, windows also represent profound and charged interfaces. They do not only provide an insight into the interiors and protect from harsh weather conditions, they also mark a change of two areas and enable a direct exchange of these.

The zone of the Pensive State is surrounded by social life and an outward-looking perspective. The blurring of boundaries between inside and outside, the private and the public, seems to be central to this moment. Pensive State encourages us to question the seemingly dissolving borders that surround and shape these places.