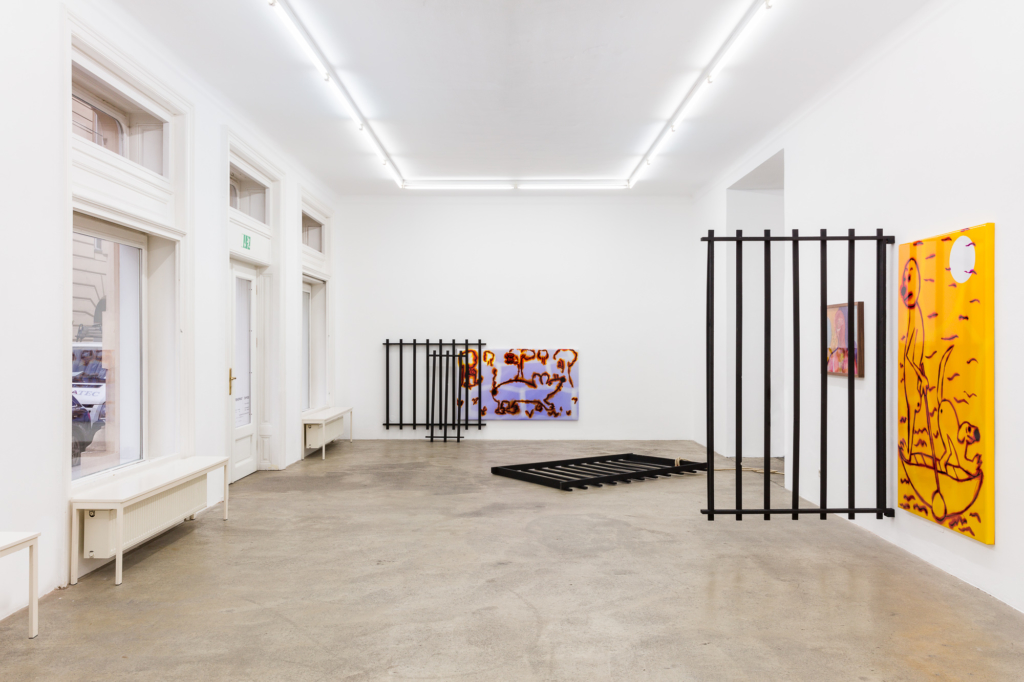 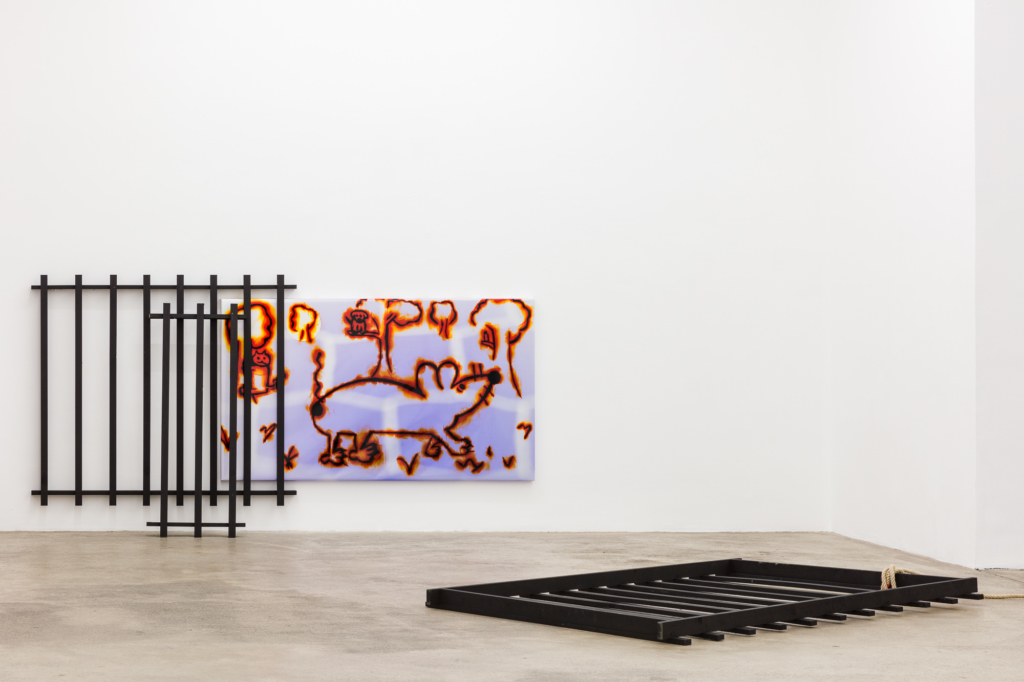 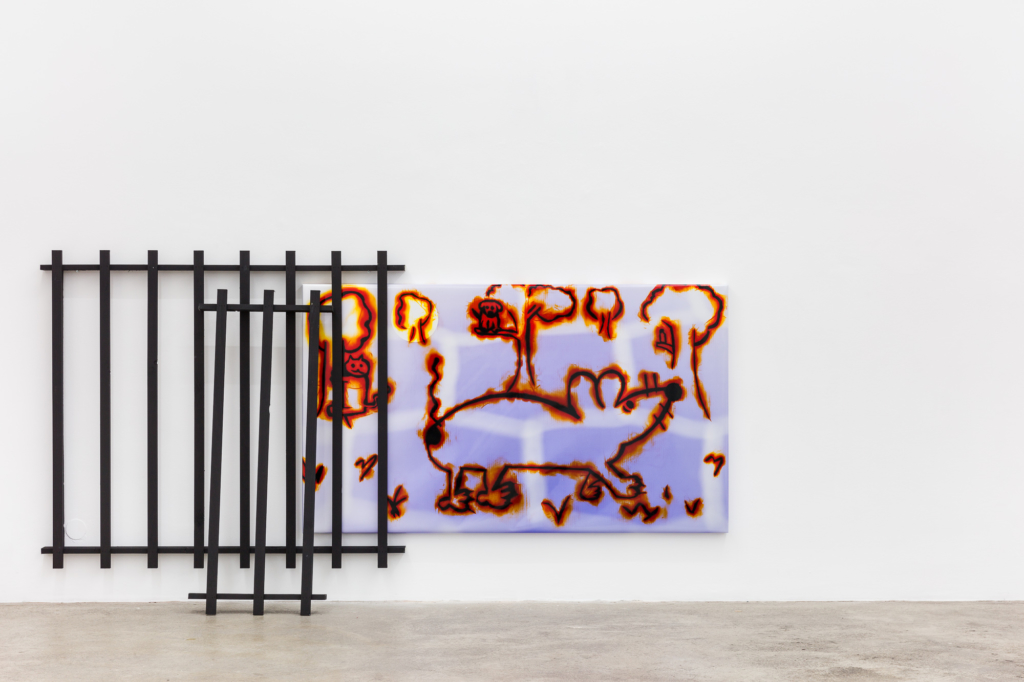 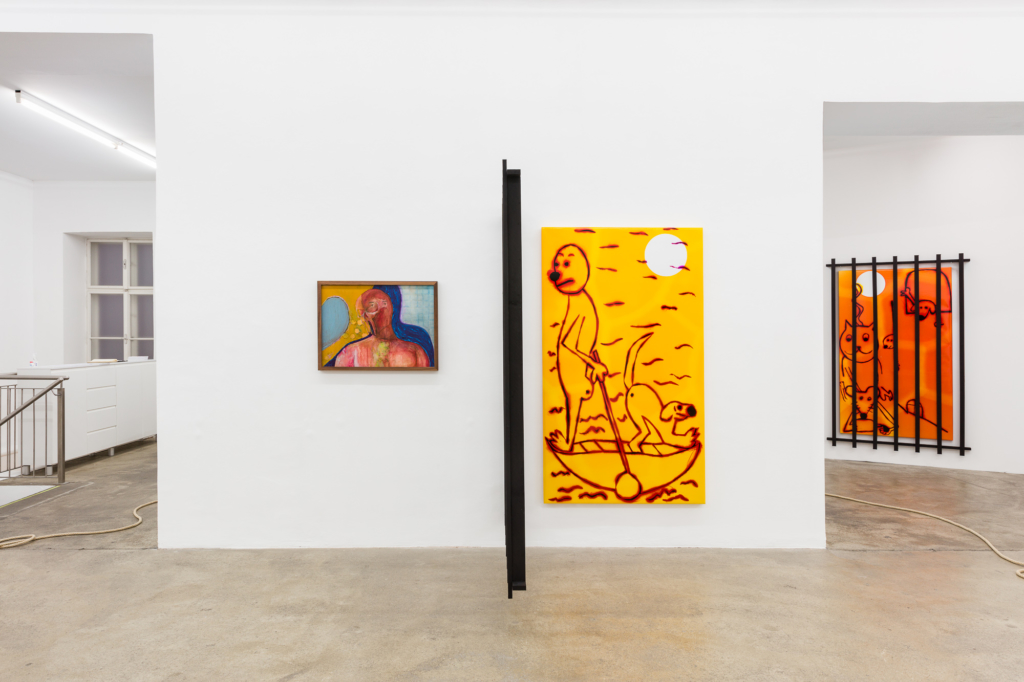 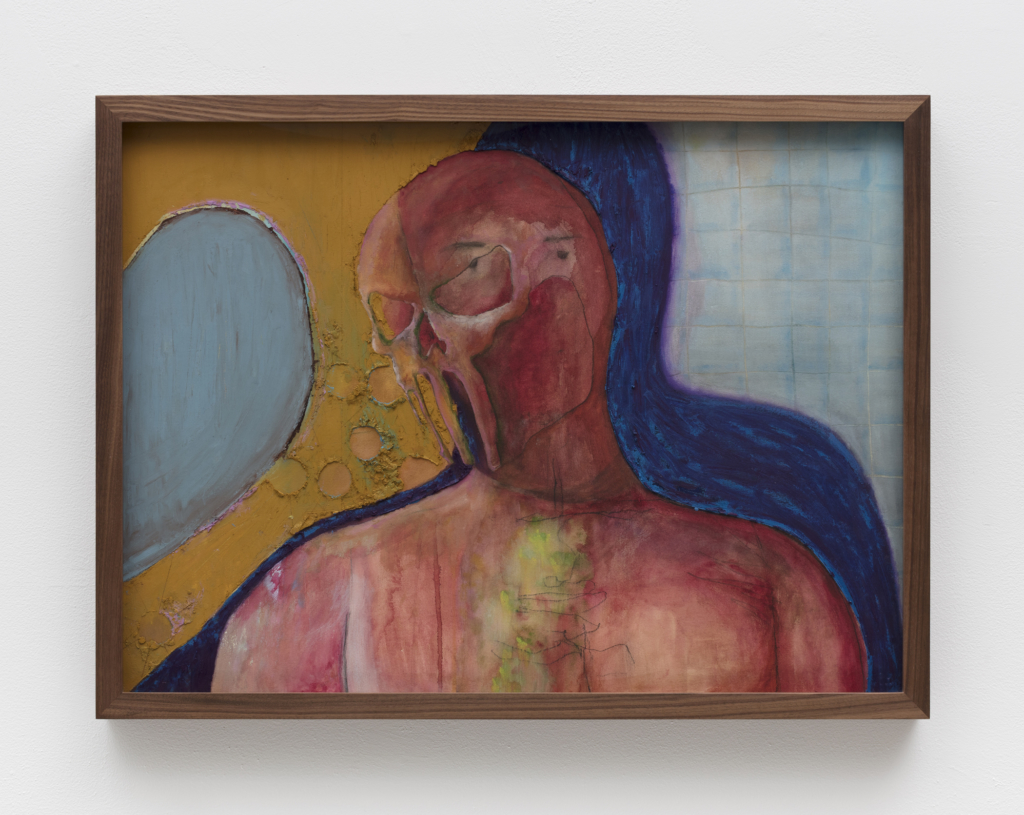 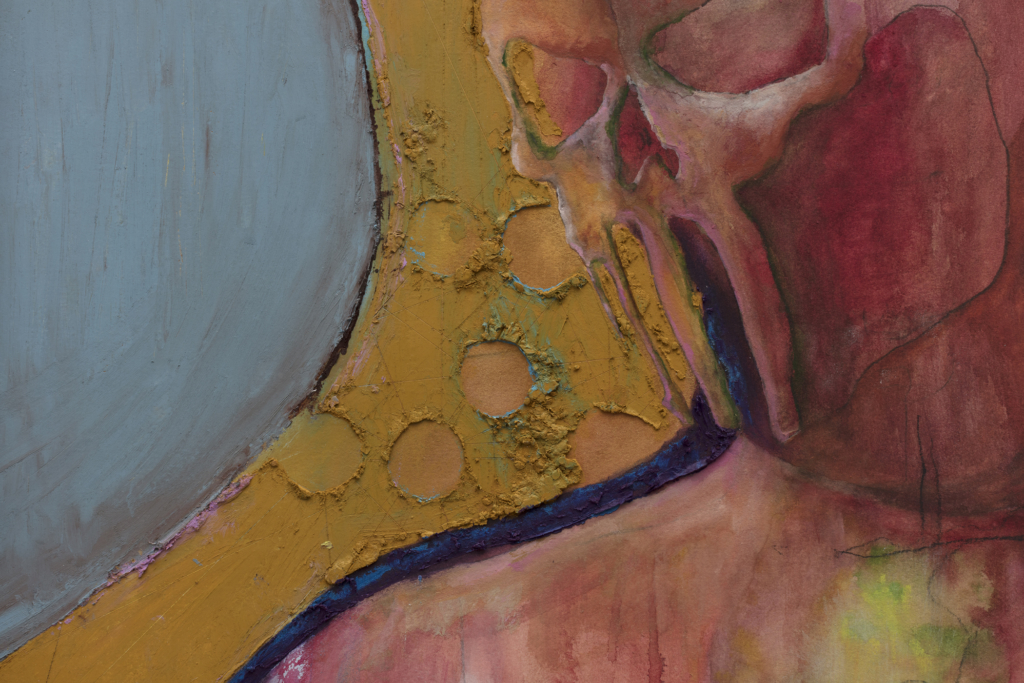 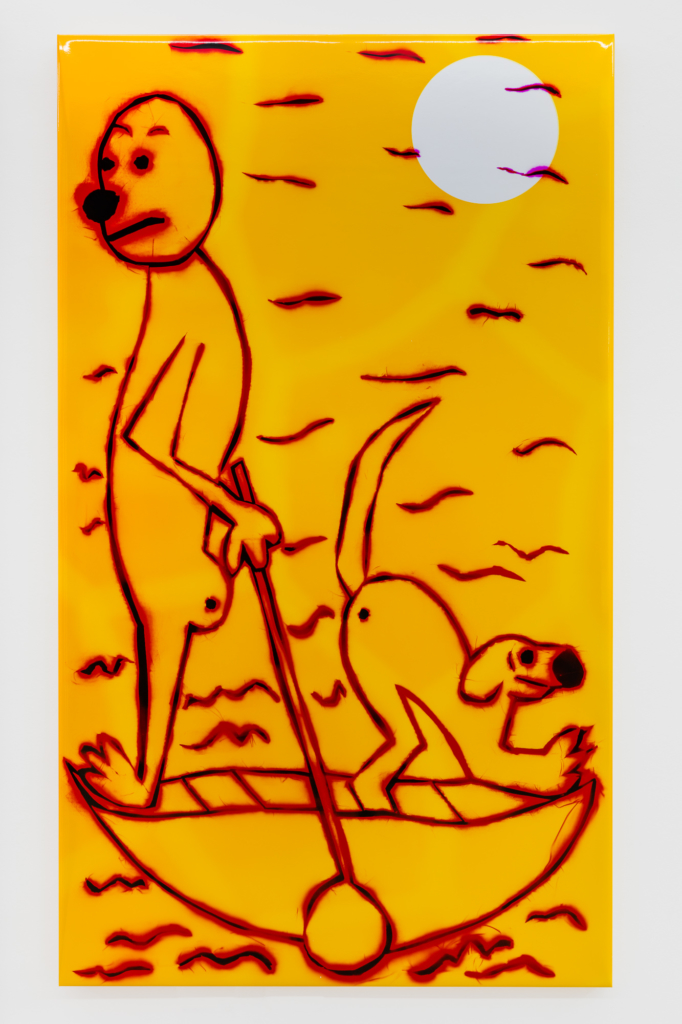 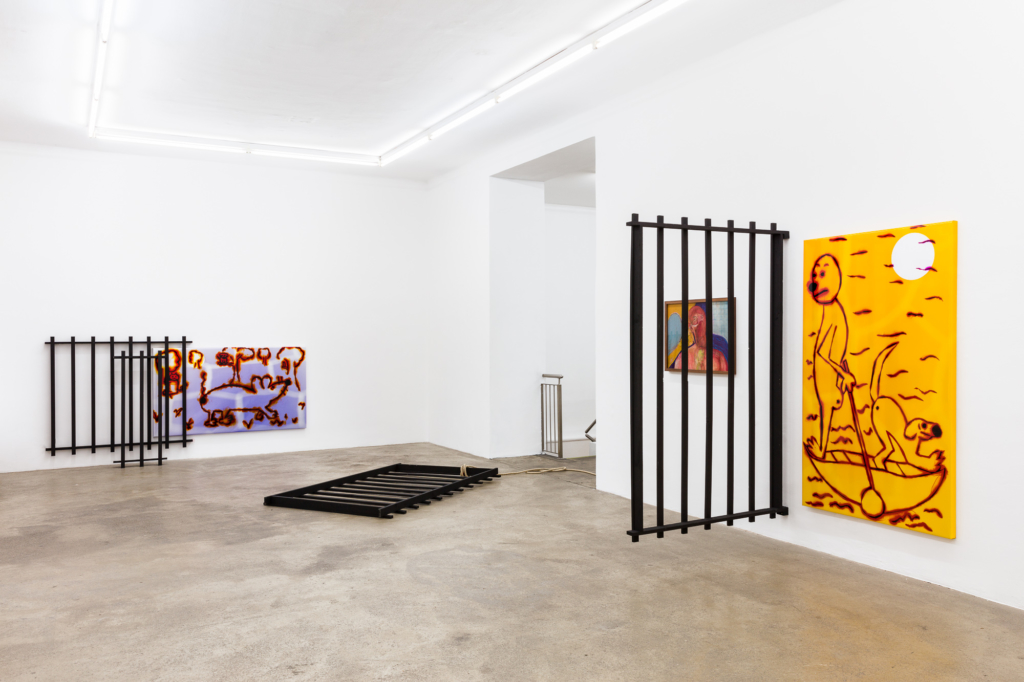 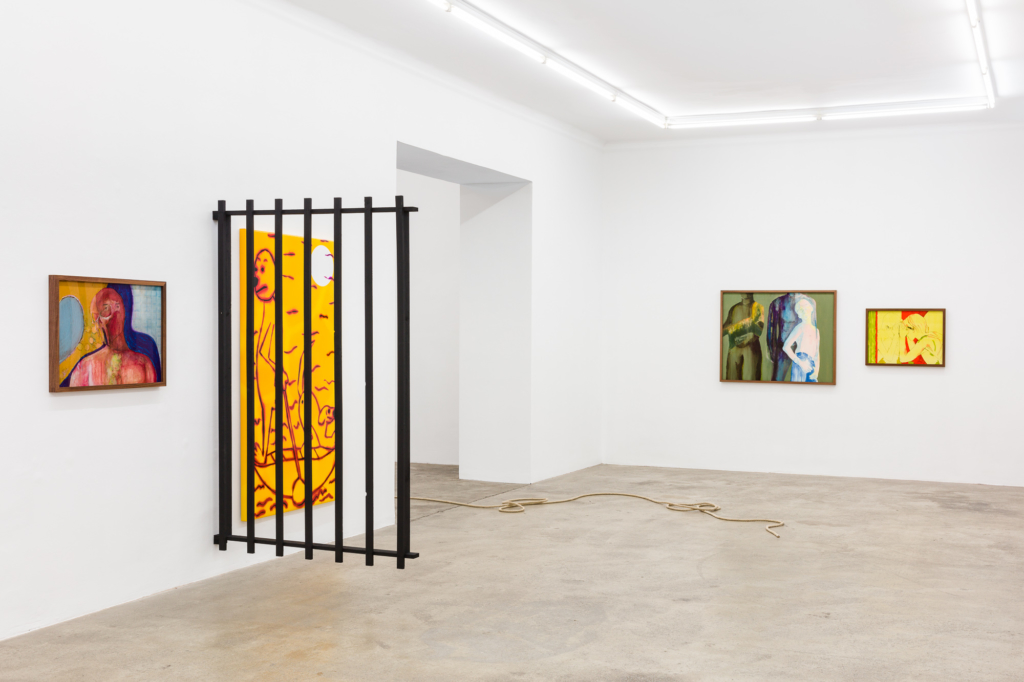 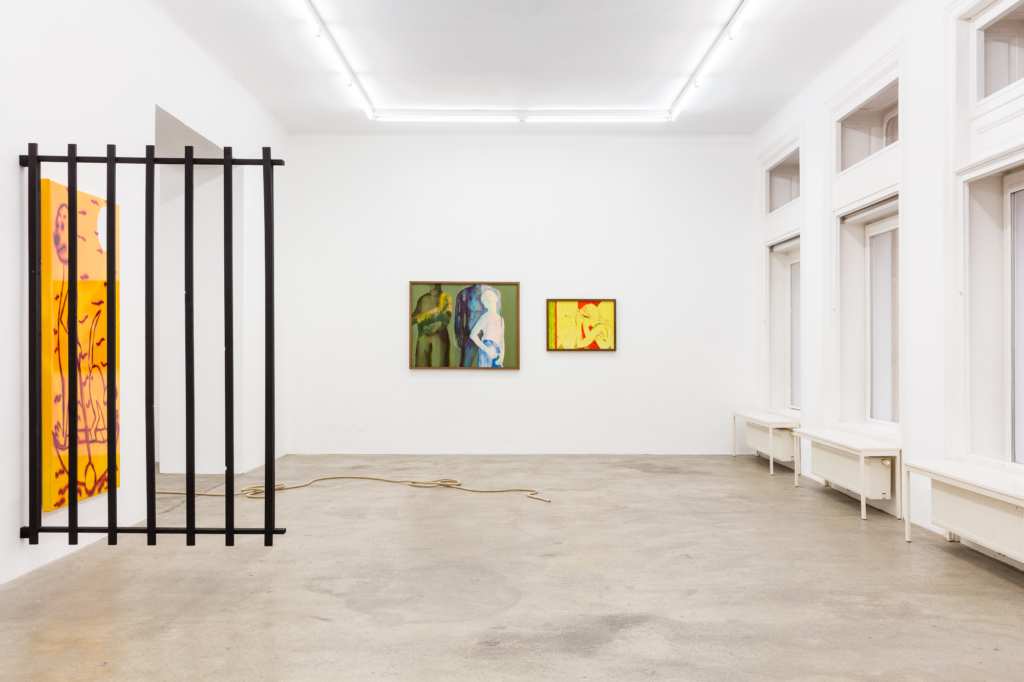 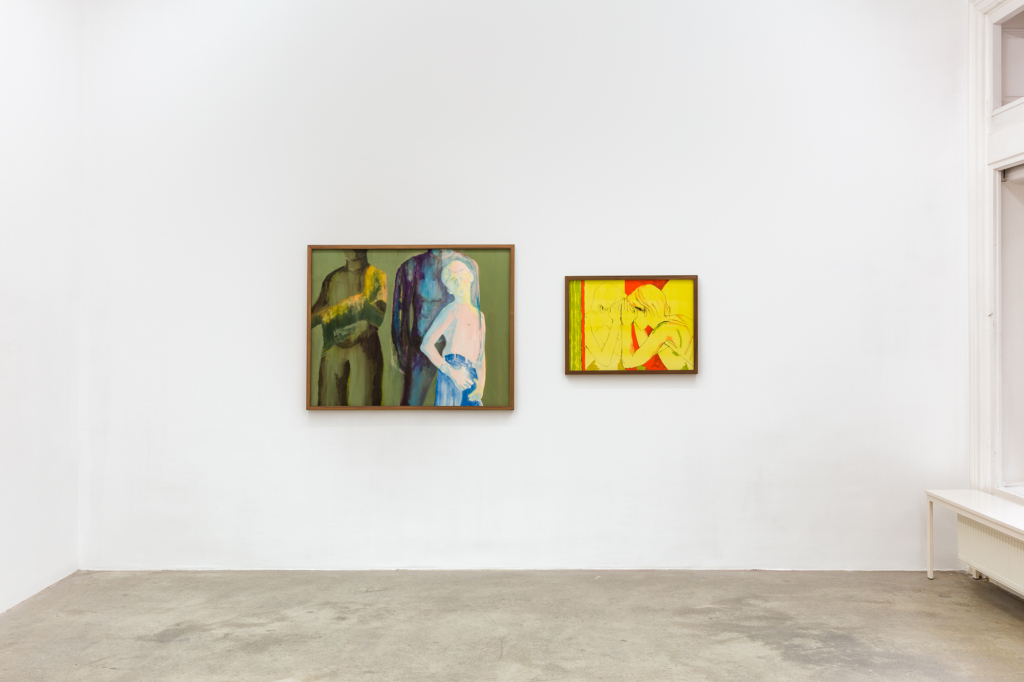 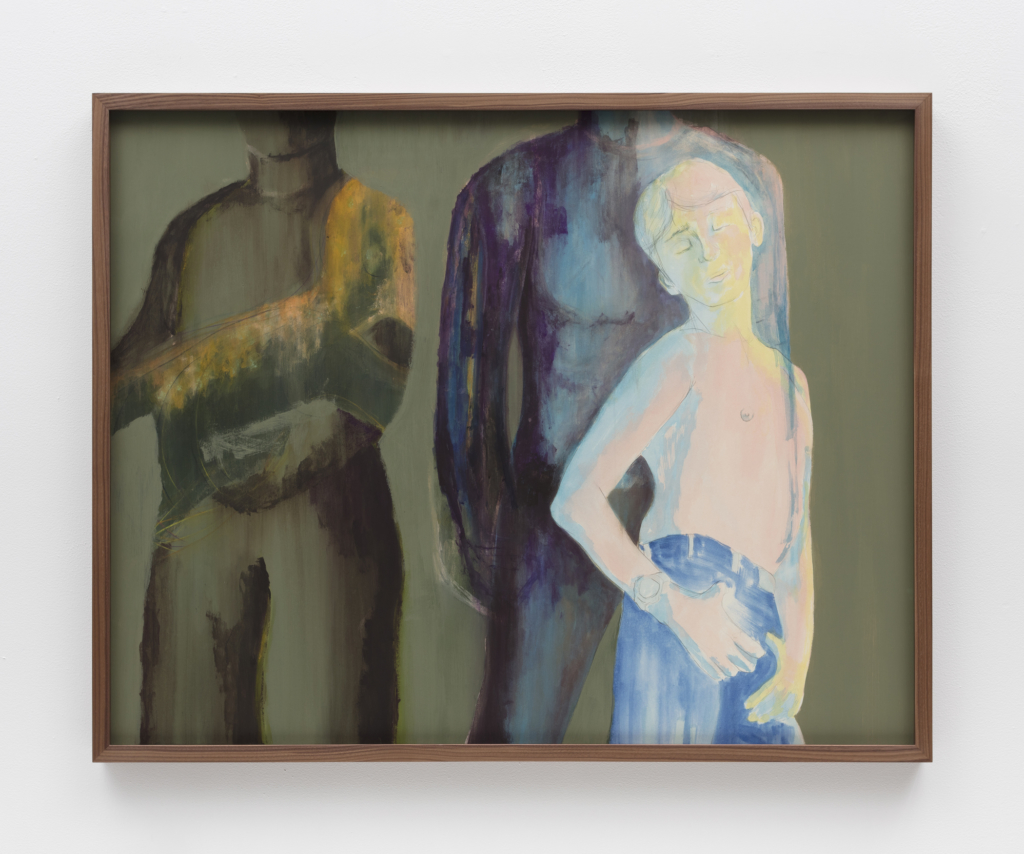 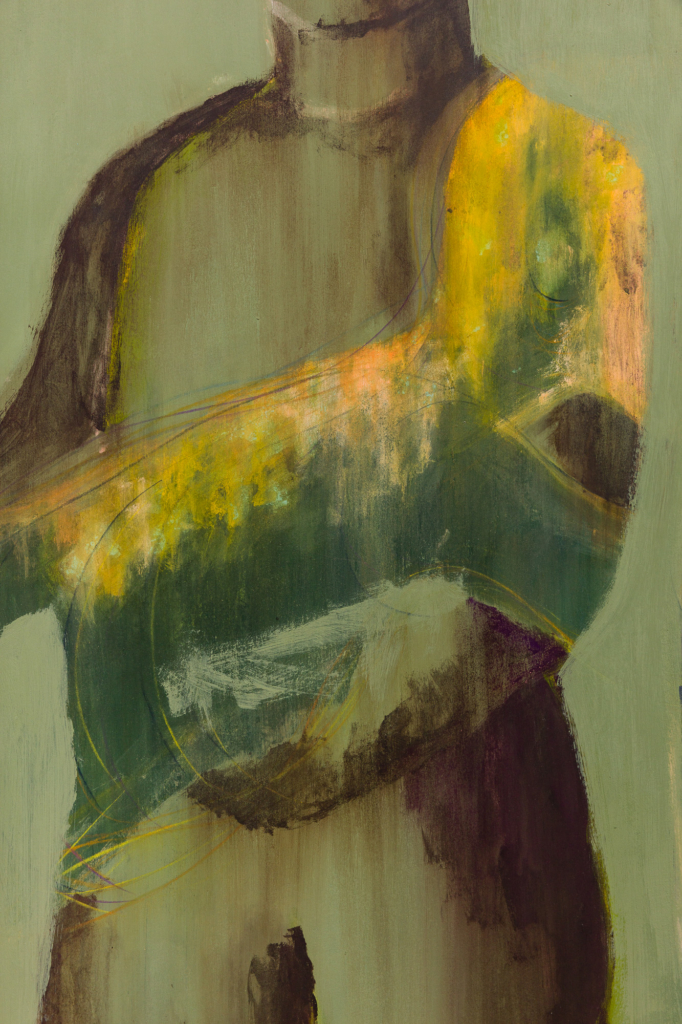 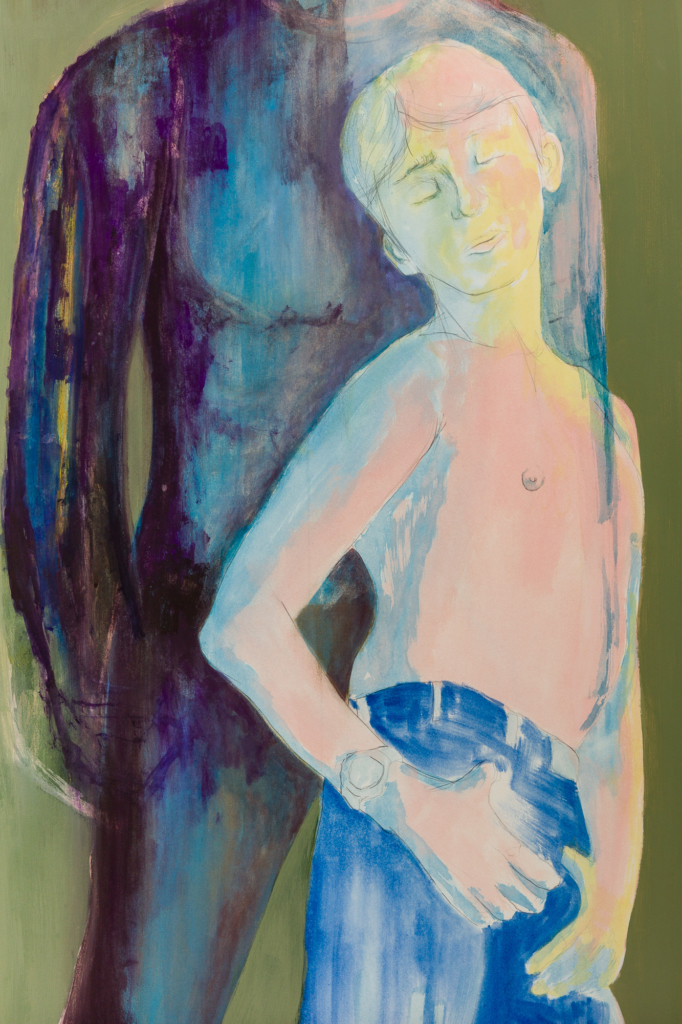 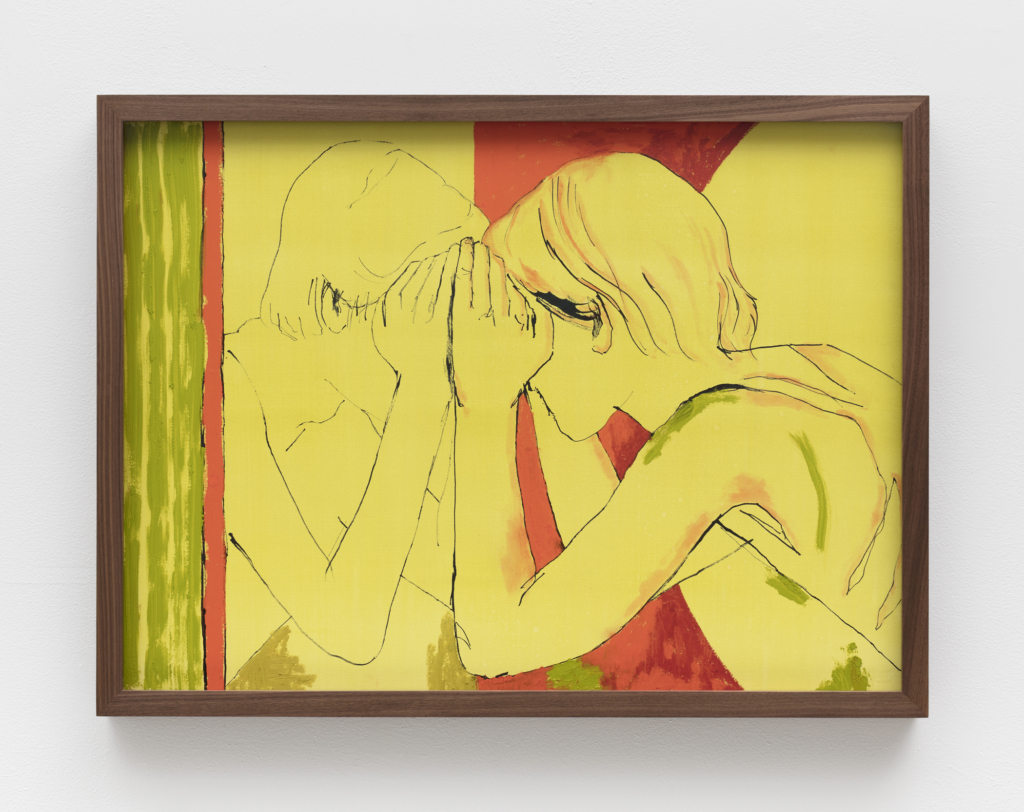 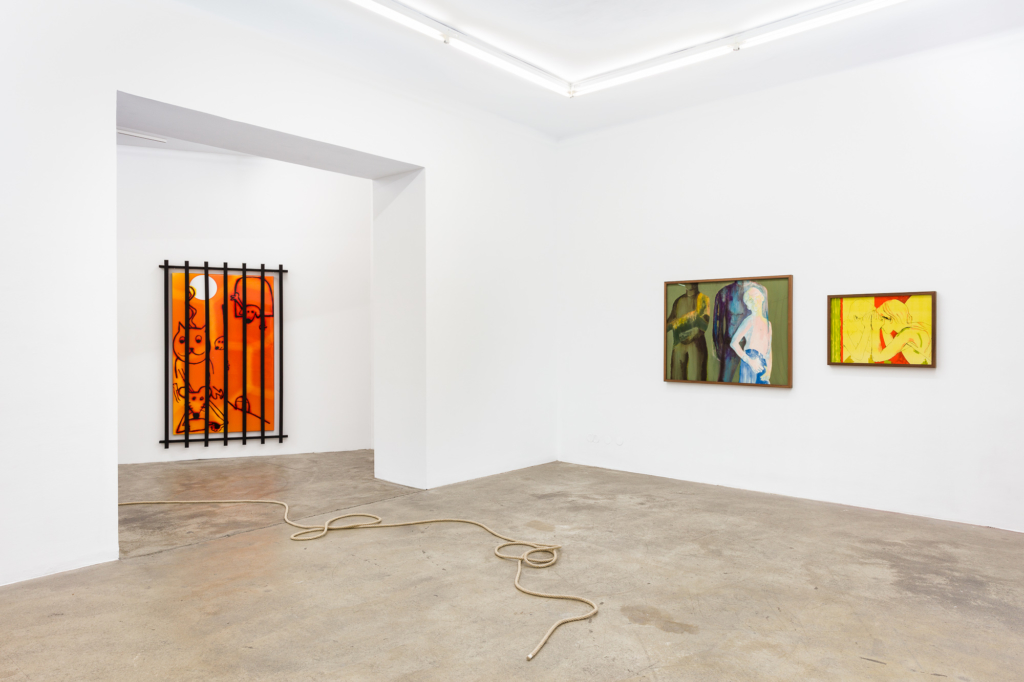 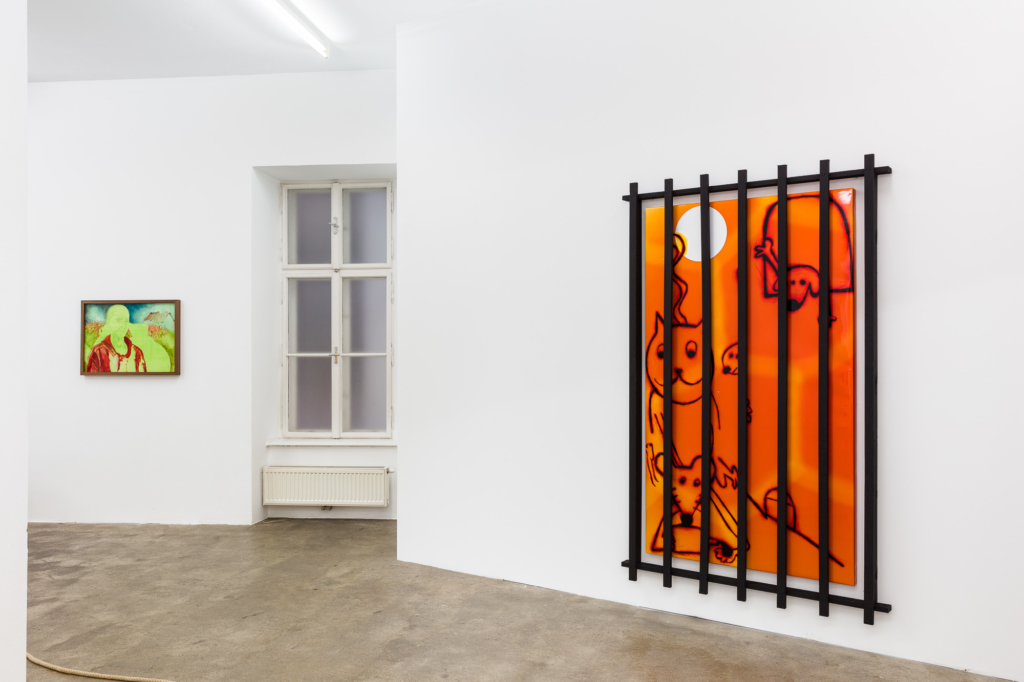 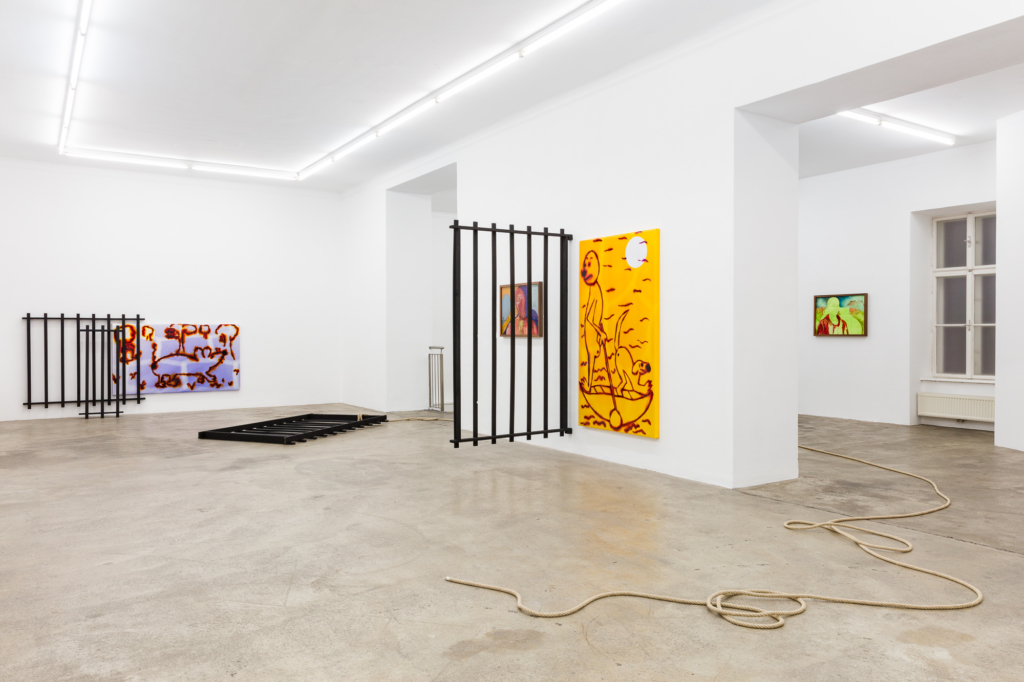 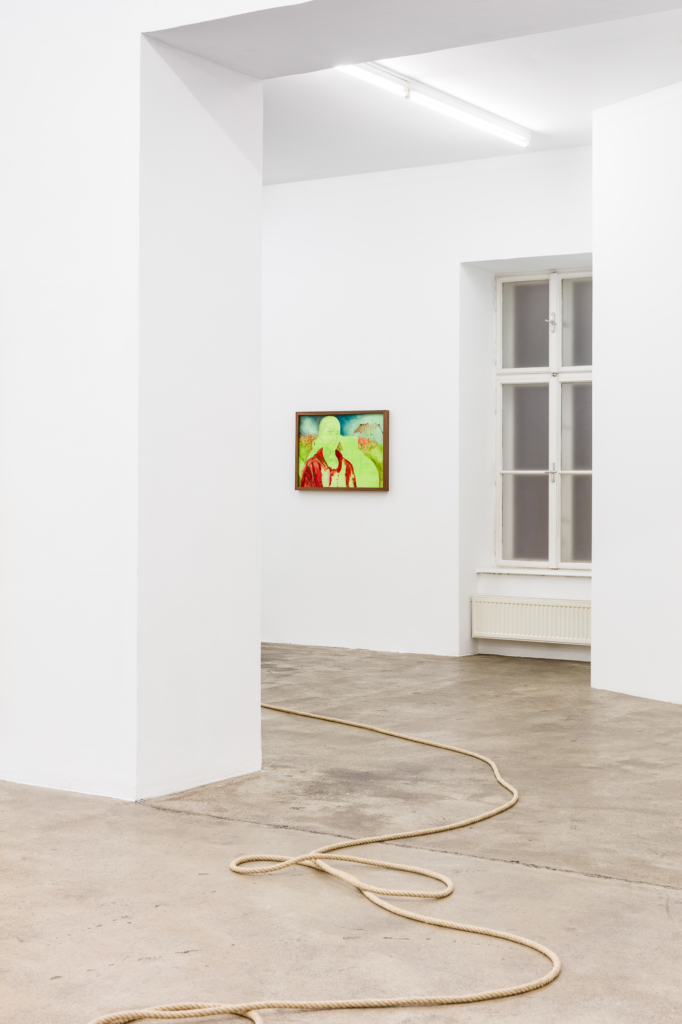 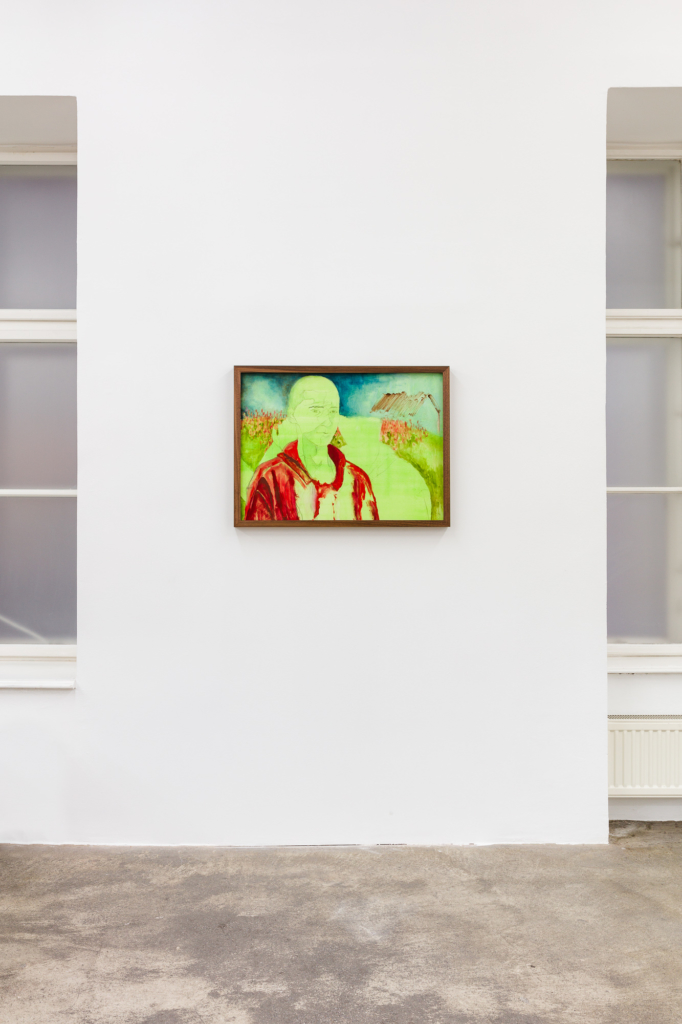 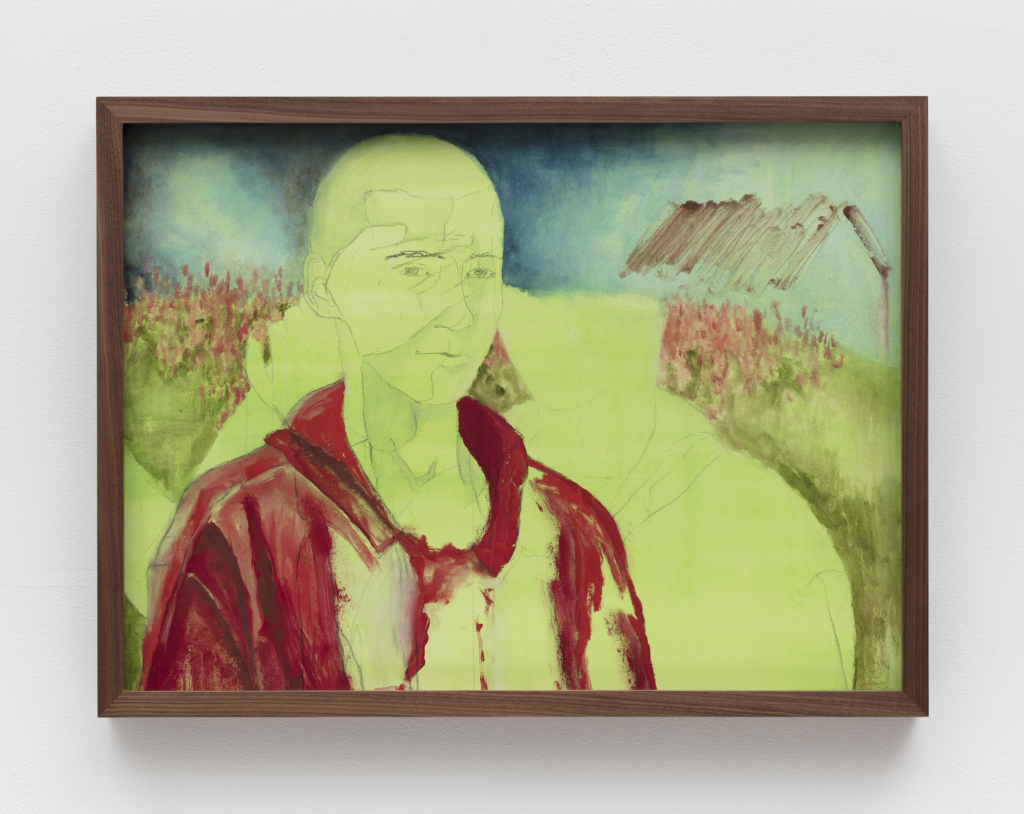 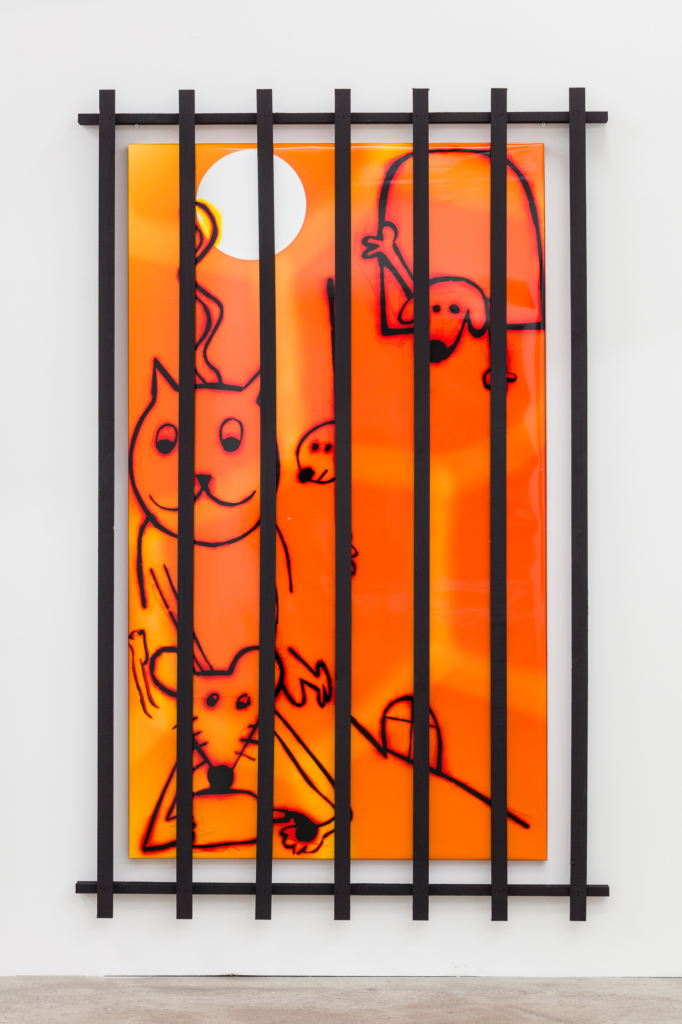 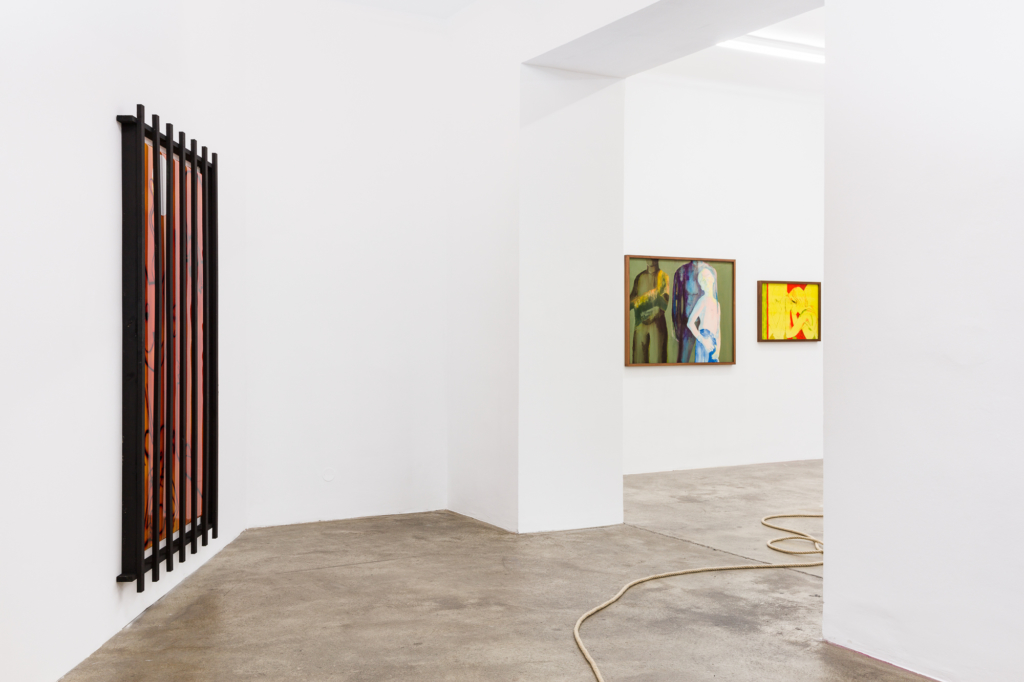 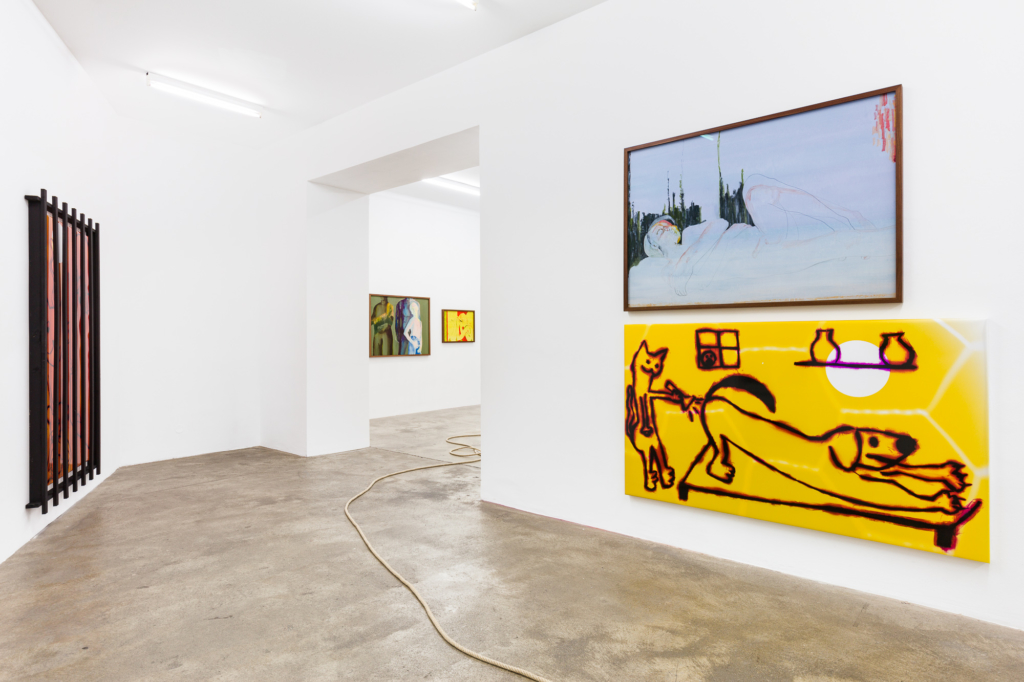 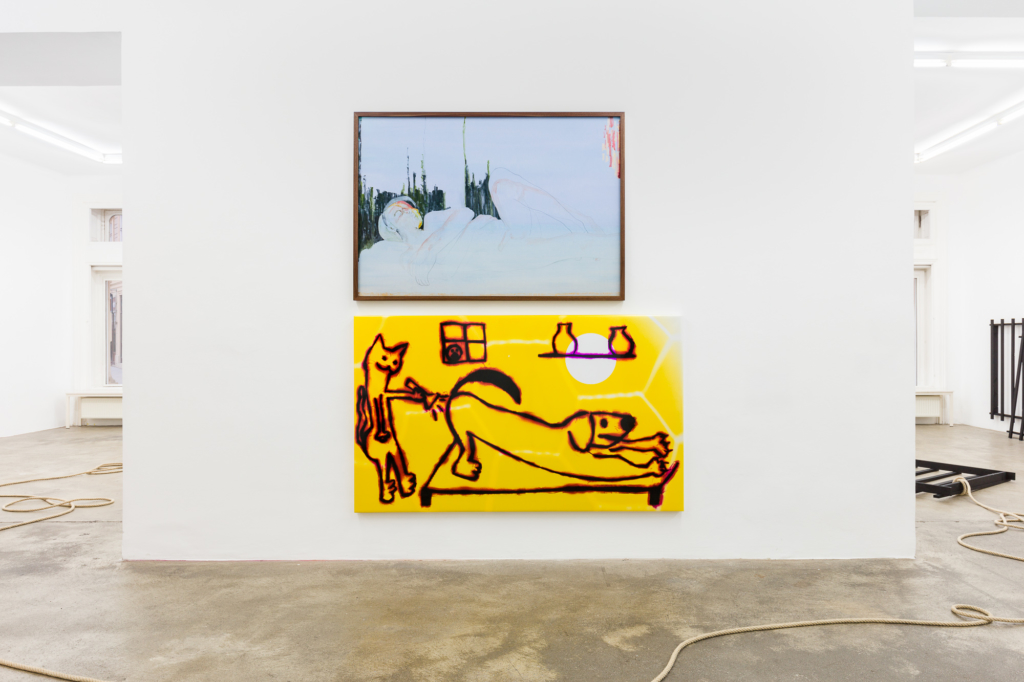 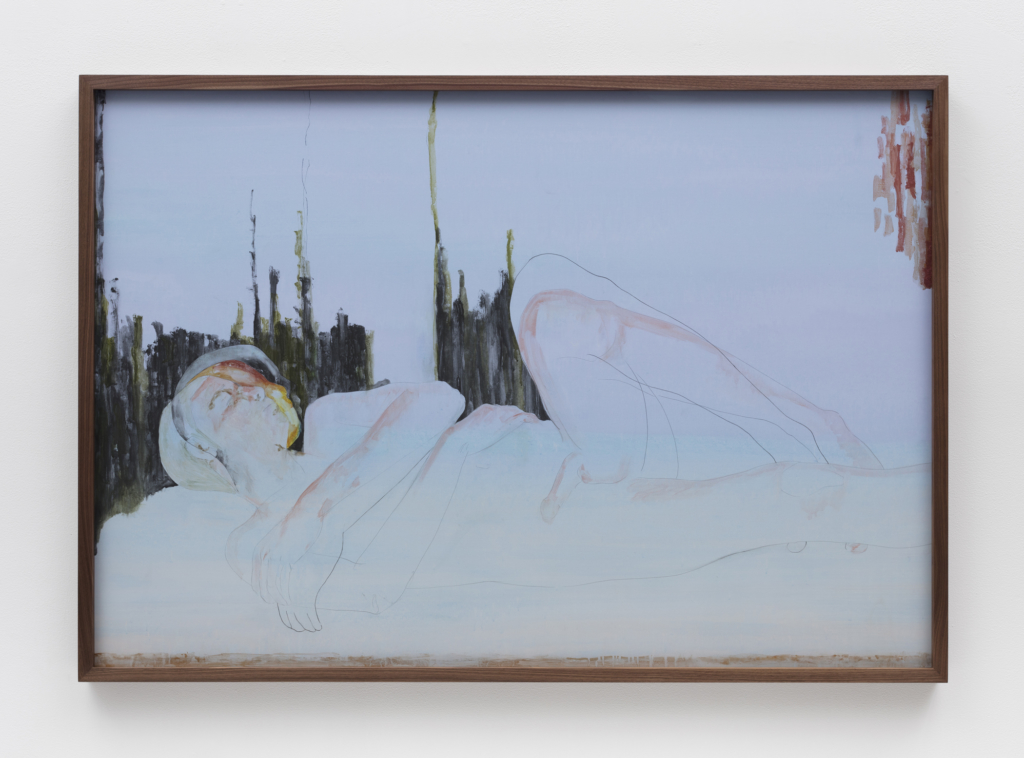 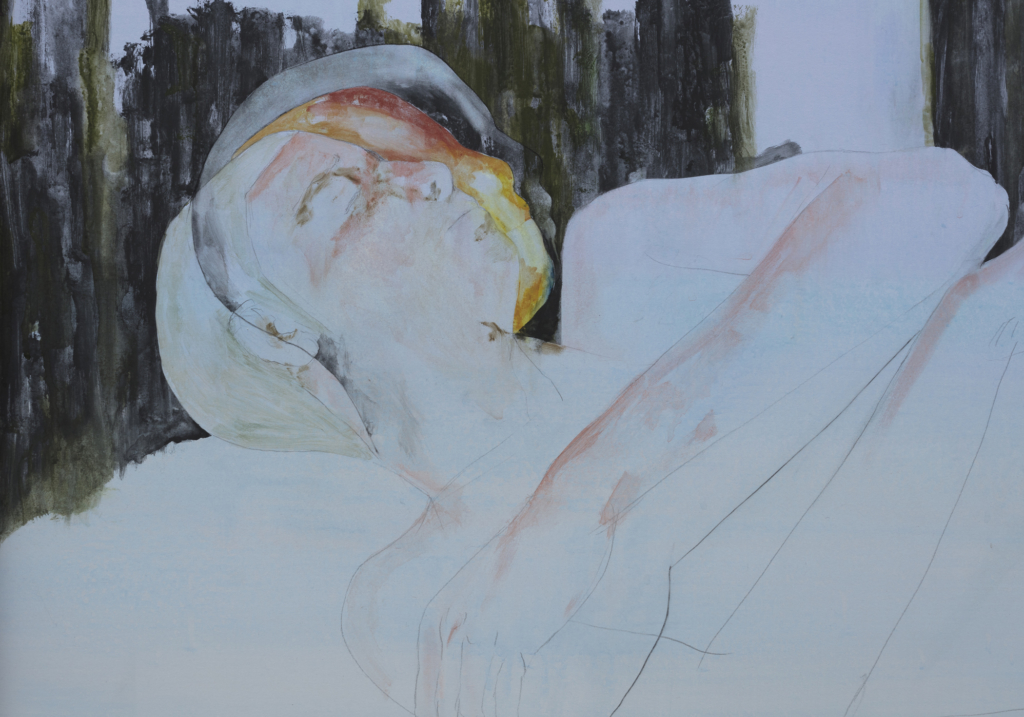 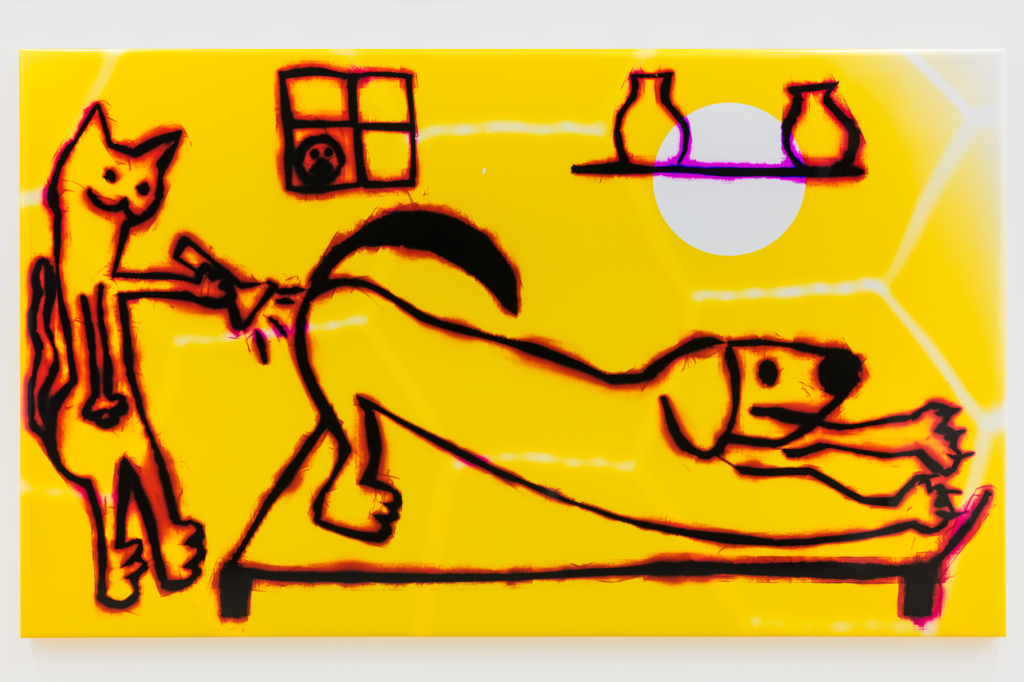 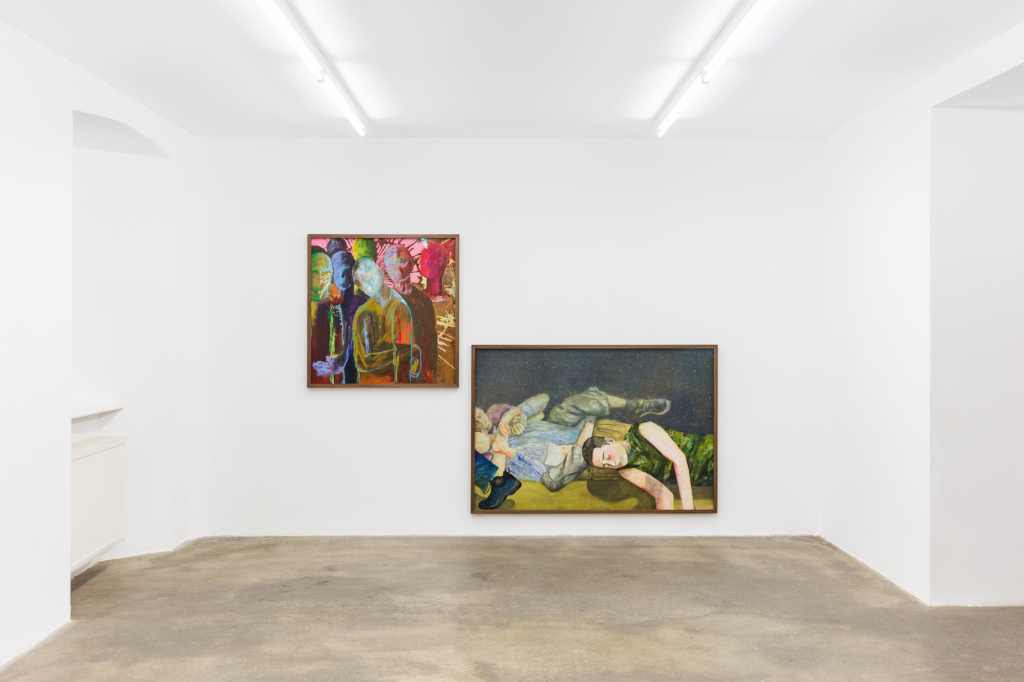 After studying at Bard College in upstate New York, Hadi Fallahpisheh and Kyle Thurman lived together in Germantown. Though most would eventually leave this rural idyll behind, they stayed. Acquaintances became friends; two distinct practices yielded collaborations. There was a performance at Off Vendome in New York in 2017 where Fallahpisheh attached himself to the outer railing of a balcony with his belt. Thurman sat on the windowsill, his legs stretching into the room. Both performed music. In the video Sheeps Meadows (2017), they cartwheel across the screen while holding each other. Over the years, they kept making works like these, even though each of them also continued developing and establishing their own practice independently. Then as now, their practices continue informing each other. Of course, it’s now even all the more interesting to see them exhibit together at Galerie Sophie Tappeiner’s space in Vienna.

On one hand, Hadi Fallahpisheh’s work is informed by the technical aspects of photography; on the other, by its theoretical claim to depict what seems to be “real.” Photography’s problem is often the all too precise and clear depiction: that’s just how it is, and no different.  This is precisely where he intervenes and starts abstracting. His photograms developed in performative darkroom acts are critical social diagrams of heavily simplified public perceptions. They speak of him, but also of the way people speak of others, of natives, of migrants, of prejudices—a testily xenophobic climate, both socially and politically. He draws with a flashlight on photosensitive paper. They’re gestural drawings made intuitively. Darkness forces them to be. The motifs are at once simple and radical. Fallahpisheh’s cast of characters is reduced to mice, cats, dogs, and people. Much like in old fables, each creature represents specific character traits. None of them are gendered. They only differ in their status: roaming/migrants to cultivated/natives. The works glow with saturated color. Thief (2020) is one such photogram that’s stretched like a painting. It shows a black drawing on a luminous orange ground. We see a cat pushing a mouse to the floor. On the right half of the image, a dog looks out the window of a house. In the middle of the image, a man behind the house looks around the corner. Here and there, Fallahpisheh puts wooden bars that have been smashed with an axe in front of the works; he frames them. It seems like the figures are breaking out of their function, out of their socially dictated fate. There’s something slapstick about them, the reduction, the “anarchy.” At the same time, Fallahpisheh breaks out of the medium: he first deconstructs the medium itself, then his own role as an artist and a migrant, along with all the associated social prejudices. There’s something amusing about the motifs, the social depictions (we know who’s who!), and the convincingly poppy, “upbeat” colors in his work. Gotcha!

The bodies in Kyle Thurman’s works are restless and vulnerable; their expression, empty. We see young male bodies, alone or in groups. Among other things, they’re rendered in coal, colored pencil, marker, and pastel on paper. The works are neither drawings nor paintings. Thurman draws on the techniques of both processes to construct his works on paper. It’s a back and forth between applying color, constructing, superimposing, scratching, blurring, deconstructing again. Some of the works are more expressive, others develop into near photorealistic representations. The combinations and contrasts between these works stand out and move over to the images’ contents. The bodies represented—some of their haircuts recall young American GIs, others evoke innocent boys—are stiff and motionless. They all share a sense of repression. They don’t seem to know where they belong, or even who they are. Their bodies “float” against colored backdrops without any support, or they lie on the floor. Like the titan Atlas, the weight of the world seems to rest on their shoulders. This world tells them exactly who they’re supposed to be. Their individual selves, however they may be expressed, are in conflict with our western culture’s definition of masculinity. The works are socially critical in a way that goes far beyond the representation of masculinity. Rather they point to many people’s struggle between developing their own personality and, at the same time, fulfilling their “role” in a world that’s networked 24/7 and socially filtered. Here, I have to think of the German-American painter George Grosz (1893-1959), Neue Sachlichkeit, and the time he worked in. As an artist, he took a political position; his works were provocative. They negotiated the class antagonisms of the big city, but also the crippled idea of masculinity after WWI. Thurman’s works offer a counter-image that visualizes a completely different kind of vulnerability. They present the inner conflicts of living in the globally networked world of the 21st century, a world where retreat and offensive collide. In between? The individual human.

When we think about Fallahpisheh and Thurman’s works together, we come up against the idea of the hero. It may sound absurd, but it’s where the works meet. Whereas Fallahpisheh makes recourse to fables and reduces his actors to a cast of mice, cats, dogs, and humans, Thurman puts a mask on his figures. Or is he taking it off? Their power comes from socially constructed ideas of masculinity. Their weakness is that they’re not allowed to talk about it, not allowed to reveal grief or rage. These tensions discharge in violence or even withdrawal. The figures in both Fallahpisheh and Thurman’s works are haunted by their own ghosts, by past selves, their origins and traumas. Of course, the self-portrait also comes into play here, too. Both are speaking about themselves. But even more so,  they’re opening themselves up, making themselves vulnerable to produce a kind of critique that doesn’t stand apart from them but is credibly formulated with them. It’s about each of our struggles to find inner peace in a society that’s constantly entertained and alarmed, overly critical and uncritical at the same time; a society where the constant quest for attention collides with ever-shorter attention spans. It’s time to rebel.